The Yes Men Fix the World 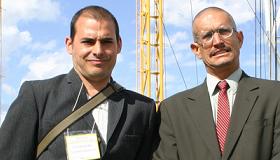 2003’s The Yes Men was a super-savvy doc about the mischief created by webmaster/hoaxster/activists Mike Bonanno and Andy Bichlbaum. Bonanno and Bichlbaum pose as corporate representatives who present morally bankrupt business plans that lay bear the unethical practices of Corporate America. In The Yes Men Fix the World, they’re up to the same high jinks but have opened their agenda to include the real life victims of Big Oil’s fecklessness to humanity. Numbers for these Men should be big for a doc as the film’s swift tempo and playful attitude help this rambunctious activist fair deliver fun with a mainstream flavor. I’m hopeful The Yes Men can Fix The World —but I’d be more hopeful if this doc was casting a wider theatrical net.

This time around, the Yes Men write/direct themselves, which allows them to expose the elements of their pranks otherwise untouched in the 2003 doc about their exploits. Bonanno and Bichlbaum show us their “lair” (an abandoned building where they jokingly squat with their computer and 1970’s era TV). They build fake websites for major corporations and wait for invitations to deliver speeches disguised as representatives from such notable pirates as Exxon, Dow and Mobile. The Yes Men say “yes” to the invitations, create elaborate, wholly serious sounding presentations and highlight corporate injustice/greed/malfeasance in the process.

This film around, they’re making a point about the tragedy at Bohpal. In 1984, the Union Carbide plant in Bohpal, which was operating far below standard safety measures, had a meltdown that surpassed the body count of Chernobyl (some site it as the world’s worst industrial disaster). A ridiculously imbalanced corporate payoff covered Union Carbide’s tracks, offering a few million to the district most aggressively affected by the tragedy in Bhopal, and then offering a face saving multi-million dollars to a small clutch of workers in a town in Texas who’d been affected by a far less drastic disaster. Meanwhile, thousands in Bhopal still suffer the life altering after-effects of the 1984 meltdown without governmental protection or defense. The doc gives face time to the victims but points most of its ammo at the corporate middle and upper echelons who patronize these conferences on business structure. After all, it was a decision on part of Union Carbide to allow the plant to work beneath safety standards, and that’s precisely the sort of decision that finds its roots at a business structure conference.

In one business presentation, Bonanno and Bichlbaum bring homemade candles laced with animal fat and human hair to discuss their revelatory invention for making fossil fuelout of the terminally ill working class. (The smell must have been fantastic.) In another meeting, they bring a gilded skeleton as a visual aid to represent the bodies of industrial accident victims who couldn’t sue and would therefore be a reasonable expenditure in a some-skeletons-are-fiscally-better-than-others re-visioning of corporate liability protection. Most audiences are agape, and then some are not—it’s the businessmen that find the Yes Men ingenious and forward thinking that really make these merry pranksters look like essential members of the media marauding activist community.

The only trouble with the film is that the pranks, though connected by the general agenda to expose appalling corporate practices, are too varied to be unified by any larger concrete goal. This works as activism but doesn’t quite work as film. The Yes men end their doc with a gentle proclamation like that offered by Michael Moore in Capitalism: A Love Story : they need the rallying public behind them to make any impact. It’s not a bad finale, but what they actually, literally, tangibly want us to do is harder to figure out than their Gilded Skeleton.