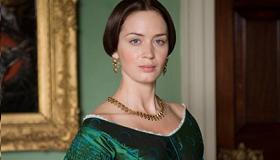 The term “heritage cinema” seems to have been invented for British films that dwell on elements of the nation’s chequered history, much of which finds a ready market overseas. The Young Victoria is no exception—a beautifully mounted and costumed odyssey into the early life of the monarch. With a script by Julian Fellowes, who won an Oscar for his screenplay for Gosford Park, The Young Victoria positively sizzles with impeccable pedigree.

Emily Blunt (Golden Globe winner in 2006 for The Devil Wears Prada ) portrays the queen at a stage in her life that will be unfamiliar to most viewers more used to seeing the monarch in her later years.

Rupert Friend is well-matched as Prince Albert, to whom he bears a remarkable physical resemblance. They are aided and abetted by a customary strong cast of Miranda Richardson, Jim Broadbent, Paul Bettany and Mark Strong.

Fifth in line to the throne at birth, Princess Victoria (after the deaths of her father, grand-father and two uncles) was heiress presumptive by the time her third remaining uncle, William IV (Jim Broadbent), was crowned in 1830, when she was 14.

Parliament passed an Act that stipulated that Victoria's mother, the Duchess of Kent and Strathearn (Miranda Richardson), would serve as Regent should Victoria succeed William IV before coming of age. A power struggle ensued with both Sir John Conroy (Mark Strong), an Irish adventurer who was rumored to be the Duchess's lover, and the Whig Prime Minister Lord Melbourne (Paul Bettany) trying to exert their influence over the Duchess and her charge. Fortunately Victoria turned 18 a month before her uncle died, making a regency unnecessary, but still the young girl continued to fall prey to the interferences of the men around her. It was only her marriage to Albert—and honorable, hard-working man who protected her throughout his life—that gave Victoria the independence and inner strength she needed to carry her through.

It is essentially a love story that focuses on the protracted courtship of the teenage princess and her first cousin, but it also deals with all the political intrigue, charting her uneasy road to the throne and the battle for power and influence that revolved around her.

Fellowes script pays particular attention to her complicated relationship with a domineering mother who, until the moment of her accession, insisted that Victoria went nowhere unaccompanied or without someone holding her hand. All the elements of the script are factually based which makes the story and its background all the more intriguing.

Blunt’s performance soars with authenticity. She embodies all of the young Victoria's self-belief combined with her touchingly awkward nervousness making her not just a historical figure but also someone that strikes contemporary recognition.

The scene in which the lovers first meet sets the tone. A Strauss waltz plays as the beautiful new Queen, in a dress of sumptuous satin and with blood-red roses in her hair, walks down the middle of the room accompanied by her ladies-in-waiting in white ostrich-feather headdresses. As her gaze falls on Prince Albert, she is transported through the crowds towards him, her eyes never once leaving his face. He bows, she curtsies, and they begin to dance. It is simply executed but the effect burns with intensity.

The production is full of such electrifying moments, ensuring that there will be no cobwebs in this history exercise.