close
Still engaging after all these years 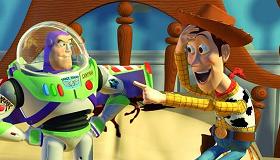 Toy Story and Toy Story 2 have scooted into theaters eager to introduce Woody (Tom Hanks) and Buzz Lightyear (Tim Allen) to a generation of kids who might not get how revolutionary Pixar's animation was back in 1995. Some of the children from then are now parents themselves, and they won't be able to resist dragging their spawn away from the X-BOX to see some truly perfect pixels. The short period of time in which this double feature will run in theaters shows that Pixar most wants to see this whirlwind re-release pay it forward with a big box office for this summer's Toy Story 3.

Before Toy Story, nearly all cartoons were flat. But Woody was round—you could imagine the weight of him in your hand. Soon, everyone else followed suit—to varying degrees of skill—but Pixar has always bested its competition by making films that are consistently well-crafted and clever. Woody and Buzz's two-weekend vacation in multiplexes is meant to do two things: get a new crop of kids amped up for their continuing adventures this summer and get everyone psyched to see how the cast will fare in the new tech style on the block: 3D.

To show off what they can do, Toy Story and Toy Story 2 have been re-mastered in rich 3D. Neither flick was initially designed for it, though some scenes really benefit from the new technology, specifically the thrilling loop-de-loop on the Hot Wheels track and later, Buzz's birds-eye plummet from the sky. Instead of playing with the form, the 3D visuals use perspective to draw the eye deep into the frame, making Andy's bedroom seem as grand as the African Savannah. That visual perspective captures the feeling of being 9 inches tall in a very big world.

But the best part of revisiting the flicks that made the Pixar name is remembering just how good they are. Toy Story brought to life everything a kid every dreamed up with his toys—it's both fantastical and lived-in. (And proto-psycho Sid's laboratory of Frankenstein toys is still frightening and guilt-inducingly familiar to anyone who ever popped the limbs off their G.I. Joes or Barbie Dolls.) Toy Story 2 cranks up the emotion and the action; it's a more by-the-book adventure script than its prequel but it’s perfectly crafted. And of course there's the voice cast, a veritable Who's Who of '80s TV stars: Jim Varney's Slinky Dog, Annie Pott's Bo Peep, John Ratzenburger's Hamm, Wallace Shawn's Rex, Don Rickle's Mr. Potato Head. Varney, who died in 2000, won't be back for the threequel (out of respect, Slinky Dog's been shelved), but the rest of the gang will be back and I think I speak for all adults and kids when I say I can't wait for playtime.