close
As untamable as the original

Where the Wild Things Are 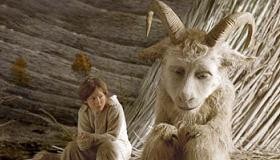 Spike Jonze kicked off his career with skate videos and for the opening seconds of this, his career-changing film, he returns to his roots, shattering any expectations that he'll mimic Maurice Sendak's otherworldly tableaux by tracking Max on a shaky cam rampage through his home. It looks like a punk home movie, and it's exactly what we need—it’s a reminder that Max isn't just a spooky kid who goes berserker in a crane stance; he's a sweaty, snotty, panting, aggravating animal whose legs (and emotions) pump faster than any adult's. Jonze has spent five years fighting to bring his vision of the book classic to theaters, and beyond a few fumbles it's hard to imagine anyone doing it better. Adults will buy the bulk of tickets. Max's hungry and threatening Wild Things might inspire some parents to leave the kids at home, and so deny their kids the shivery delight they once got from Labyrinth and The Dark Crystal when they were younger. (Junior will be sure to catch it on DVD.)

Sendak's classic is about rage, frustration and empathy without tidying these themes into a moral. In ten sentences it mapped childish fury and invited us—but did not order us—to follow along. Like a kid throwing a tantrum, it's willfully inarticulate. Jonze and co-writer Dave Eggers give it words. Here, Max (Max Records, raw and great) is a lonely boy who's being outgrown by his teenage sister (Pepita Emmerichs) and overlooked by his loving but exhausted single mom (the queen, Catherine Keener.) Max’s sister and mother have both reached that age where the problems of childhood seem small. To Max, every smashed snow fort is an outrage that he can only express through destruction, and after he's burnt out his rage he's left shivering, afraid and guilty. Jonze not only remembers the emotions of youth, he makes us feel them— Where the Wild Things Are takes place in a world where every interaction is fraught with landmines and, in an instant, playtime can turn to war.

The rules, or the unclear grasp of them, are the same in the land of the Wild Things, but the danger is heightened. Now, if Max screws up he won't be spanked—he'll be eaten. (Putting actors in 9-foot suits makes the physical tension real—when a beast casually throws an arm around the boy, we see Records struggle to remain standing.) After a nasty fight with his mother, Max arrives in their land and meets seven monsters, some of which share different pieces of his personality. Carol (James Gandolfini) is hot-tempered and passionate; The Bull (Michael Berry Jr.), an outsider; KW (Lauren Ambrose) is determined to prove her Independence; Judith (Catherine O'Hara) is suspicious; her mate, Ira (Forest Whitaker), is pacifying; Douglas (Chris Cooper) is brave and athletic; and Alexander (Paul Dano), the littlest by far, is ignored and despondent. (This is one case where I wish voice casts weren't tied to stars—their modern, recognizable grumblings strip the mystery and majesty from the monsters.) Max and Carol's instant bond helps the boy establish himself as their fearsome king. But as allegiances shift and affection gives way to apathy, Max is forced to broker peace between the squabbling seven and satisfy their demands for happiness, lest they turn him into a pile of bones. In short, he's pressured to meet irrationality with empathy—just dessert for parents who've cursed their brats with "Wait until you have your own kids!"

Where the Wild Things Are is so patient and non-judgmental that you're welcome to simply bliss out on the visuals. The artistic team has created marvels—everything feels dirty and hairy and real and full of grand obstacles (the way I saw our shag carpeted living room when I was a toddler). Jonze has captured youth. That youth is arbitrary and unhinged and totally focused on the moment means that Wild Things will frustrate people looking for a tidy blockbuster that's mechanically driven towards bursts of applause. Away We Go, Eggers' last script (written with his wife Vedela Vida), grasped the confusion of adults, but because it avoided Big Teachable Moments, it was dismissed as a trifle. I can also see that happening to Wild Things, but like the book—still going strong after 46 defiant years—it won't slink away just because it's hard to tame.