close
Cashing in (big!) on the apocalypse 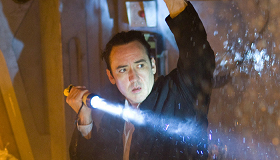 Apparently determined to end his career with a bang as the ‘disaster film’ director of record, Roland Emmerich has thrown everything imaginable at the screen in this mother (nature) of all destruction flicks. With the world about to implode, a select group of people are determined to survive and preserve the human race in this impossibly ludicrous guilty pleasure. Silliness aside, 2012 will undoubtedly be a worldwide box office smash, luring any moviegoer willing (and able) to turn off his brain and go along for the 158 minute thrill ride.

Emmerich, the force behind other end-of-life-as-we-know-it epics like Independence Day, The Day After Tomorrow and even good ‘ol Godzilla (1998) has outdone himself with this global disaster tale that blames the world’s impending end on natural causes. A series of non-man made calamities befall the planet starting with earthquakes in California and worse as a growing tsunami makes its way to China, taking out everything and everyone in its path. Emmerich and his co-writer Harald Kloser are smart enough to know sheer chaos would not cut it without compelling human characters to root for  and then watch die. Central to the plot is loser author Jackson Curtis (John Cusack) whose brilliant novel led to the breakup of his marriage to his wife Kate (Amanda Peet) who, consequently, has recently taken up with another guy named Gordon (Tom McCarthy). Still the ever-protective Dad, Cusack heeds warnings from nutcase Charlie Frost (Woody Harrelson) and gathers up the family just as the apocalypse begins its deadly march. Meanwhile U.S. President Wilson (Danny Glover), aware for a few years that all this was coming, presides over a plan to create a Nemo-like Nautilus contraption that key government officials from around the world will use to ride out the storm. Harrelson is somehow privy to information of the exact whereabouts of this race-saver and has maps to help Cusack and company find it.

With over-the-top car chases, plane chases and every other kind of chase, this CGI wetdream of a movie keeps the special effects houses in business as every significant monument from the White House (why is Emmerich determined to gut this place in film after film?) to Rio de Janiero, to the Vatican goes down, down, down. With some witty touches (a takeoff on Governor Arnold Schwarzenegger is a hoot) and lots of unintentionally funny dialogue, 2012 (which gets its inspiration from the Mayan calendar predicting major “changes” in that year) somehow manages to keep us riveted for over two and a half mind-boggling hours.

Although the true stars here are the visual effects wizards, Cusack cashes in whatever indie-cred he’s had in the past to sock this dumb stuff home. Amanda Peet is very good at looking worried/terrified while McCarthy as her boyfriend comes in handy as an ace pilot after just two short lessons. Glover is stoic as the President while Chiwetel Ejiofor is just too damn earnest as his all-knowing science advisor. For that matter so is Thandie Newton, as the President’s humorless daughter. Harrelson is a riot as a low-rent radio host and would-be prophet who foresees the world’s end and Oliver Platt steals every scene he’s in as the highly manipulative Chief Of Staff.

Theater owners need not worry as Sony’s holiday destruction derby is anything but a disaster and should fill their coffers all season long.