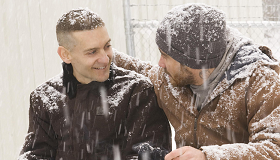 Six time Academy Award nominee Jim Sheridan takes on an American remake of Susanne Bier’s powerful 2004 Danish film, Brødre. This update relocates the story in Afghanistan where a marine goes missing and his n’er-do-well brother takes care of his wife and two kids back at home. With a marquee cast that includes Tobey Maguire, Jake Gyllenhaal and Natalie Portman, this intense story of family conflict is powerful and gripping, an absolutely mesmerizing motion picture experience. Held back from release by Lionsgate for a year until securing the right Fall slot, fans of the stars should provide a decent opening and word of mouth could be surprisingly strong despite stiff Holiday competition and the overall weak track record for contemporary war-related films.

Early scenes establish the family dynamic as Sam (Maguire), a decorated Marine, is about to ship out to Afghanistan for a fourth tour of duty while his troubled brother Tommy (Jake Gyllenhaal), just out of jail, stirs things up at a farewell dinner with Sam’s wife, Grace (Natalie Portman), their daughters Isabelle (Bailee Madison) and Maggie (Taylor Geare) and parents Hank (Sam Shepard) and Elise (Mare Winningham). Things soon change once Sam’s helicopter is shot down and he is presumed dead. Tommy’s priorities are altered as he works his way into the kid’s and Grace’s hearts. When it turns out Sam isn’t dead and returns home after a traumatic, life-altering experience with the Taliban, the brothers’ roles are reversed. An unstable and suspicious Sam becomes the dangerous one while Tommy tries to be understanding and responsible. Things come to a head at another awkward dinner in which the director ratchets up the tension.

Structurally, Brothers is remarkably faithful to the Bier film. Sheridan and screenwriter David Benioff still tip the balance in this version to Sam’s character after a pivotal scene in Afghanistan where he is forced to make a wrenching decision that strips him of his humanity. After that point the character goes in new directions taking the key dramatics of the film along with him.

As the tortured marine, Maguire gives the best performance of his career to date. His anguish during the scene with the Taliban and his slow burn during the aforementioned dinner scene build to the boiling point but the actor never goes over the line. It’s a mature role and a risky one that he pulls off with skill. Despite the film’s title Gyllenhaal is really a supporting player here and handles the part of the evolving sibling well while Portman is terrific as the emotionally confused but sympathetic wife. Standout among the rest of the cast is 10 year old Bailee Madison who delivers one of the best kid performances seen in a long time. Her bit with the balloon at the dinner table is an instant classic.

With Brothers Sheridan has done the very fine Danish original proud and made an Oscar-worthy must-see movie for our times.