on November 17, 2009 by Barbara Goslawski
Print 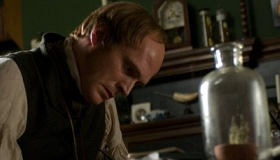 2009 is the 200th anniversary of Charles Darwin’s birth and the 150th anniversary of the publication of his groundbreaking scientific treatise, On the Origin of Species. Too bad that Jon Amiel’s biopic, Creation, is a rather underwhelming experience. The film recalls the events preceding the publication of this masterwork—but then it stops. Darwin’s personal tragedies and intellectual dilemmas, coupled with his moral struggles, are rife with possibilities, but Amiel disappoints. He just can’t seem to rise above the level of pedestrian drama. Without that drive and insight, and with only modest star power in the ranks of his creative team and actors, the box office returns on Creation will be rather underwhelming too.

Darwin’s scientific explorations culminated in his theory of evolution through natural selection, perhaps the single-most influential modern scientific notion. As controversial as this theory remains today, it was beyond scandalous in late nineteenth century society. The personal consequences for Darwin alone were grave; it threatened his marriage, his friendships and even his personal safety. Religion was the foundation of society, as Darwin himself admits in the film, and he struggles deeply to come to terms with the breach between his logical mind and his emotional self. These internal struggles are the very stuff of great art but Jon Amiel is too mired in the details to produce more than a mere chronicle of the facts. The pace, the visual style, the very composition of the film is a threadbare chronicle of events—and it’s plodding in the most irritating sense. Creation barely registers as an interesting period piece.

Real-life couple Paul Bettany and Jennifer Connelly, as Charles and Emma Darwin, labor to portray these interpersonal conflicts but are often lost in the scenery, so to speak. The film is populated with too many side stories, not least of which revolves around the death of their own daughter, Annie. Emma clings to her religious beliefs as Darwin`s scientific conviction becomes more steadfast. He’s a troubled revolutionary thinker and pores over the consequences quite seriously. He is agitated to the point of physical illness. Friends and colleagues congratulate or despise him. His reputation grows even as he naively clings to the assertion that he has no enemies. The line in the sand is firmly drawn: it’s science versus religion, reason over passion.

Amiel tries to reflect this struggle in his filmic strategies. Typically, he develops a scene in a single shot, foreground action commenting on background and vice versa. The film acquires a staged feel, self conscious to the point of being ineffectual. The actors’ valiant efforts to portray honest human emotions fall flat in this context.

Quite simply, the core issues that drive Creation require a more vibrant approach. As it is, emotions become muted and conflicts are submerged. Tension is present but it is repressed. Technically, the details of the story build to a conclusion but it is one that fails to resonate. In the end, Darwin simply finishes the book. But isn’t that when the real drama starts, when the debate goes public?