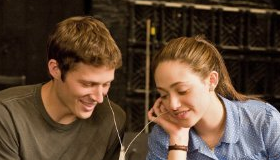 A yearning-and-identity triangle featuring three kids at an affluent suburban high school is the stuff of Dare, a modest indie out of this year’s Sundance fest. Quite good in brief stretches but not distinguishable enough overall, freshman director Adam Salky’s picture evinces the coming of age confusion he’s chronicling. Sputtering yet respectable, it will form a blip on performance charts and will be remembered, if at all, as an early credit on the resumes of a few youngish—that is, far beyond teenage—talents.

The sex scenes are an effectively discomfiting blend of ickiness and eroticism. On the one hand, we cringe as Alexa deflowers herself by straddling a startled Johnny and as Ben plucks up the courage to make a pass at Johnny in the latter’s indoor pool. On the other, the sequences evoke envy and tenderness toward the young adults as they grope toward self-awareness. (And lest we be too condescending, the teens do get what they’re after.) Hats off to Salky for hitting his targets. He misses, however, when it comes to pacing. The longeurs within virtually every scene in the movie are annoying. Once he realizes that not every pause is meaningful and starts to speed things up, he could become a filmmaker to reckon with.

His well-observed handling of conversations between Johnny and Ben’s mother (Ana Gasteyer) as well as an understatedly hilarious scene (hint: popcorn and a Ken Burns documentary anyone?) at Ben’s house, where Alexa is staying while her parents are out of town, also deserve favorable mention. Gilford and Mara—smoldering and electric screen presences, respectively—are the acting standouts. For her part, Rossum succeeds in making one forget Joel Schumacher’s Phantom of the Opera (in which, she played Christine).

The psychology underlying David Brind’s script is basic and the premise predictable, but they do give rise to the occasional dead-on mood and a sufficient sense that each character is more than a type. If the story were more fully developed, Dare could garner a following in, say, more edgy personal development curricula or in college towns amongst nostalgic first-years. As it is, the ending is terribly abrupt and less than edifying.