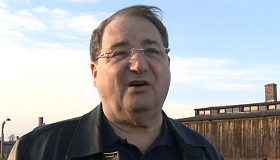 Anti-Semitism is pretty uncontroversial: it’s always bad. What Yoav Shamir’s documentary, Defamation, uncovers is the right and left wing political perspectives in the Jewish International community that have helped the term change meaning: Anti-Zionism is the new Anti-Semitism. Problem is, the new term is singly political but it still carries all the old racist baggage—clearly this is problematic. Shamir acts as our navigator through the subject and thereby softens the hard edges and proves the film is as much a political act as a personal exploration. Interviews with academics, politicians and Rabbis fill in the gaps in information with authority and varied perspective. Theatrical numbers for Defamation should be better than your run of the mill doc though the Hollywood community that might be responsible for the film’s publicity (or lack thereof) are precisely the community that might find this material either contentious or bothersome.

An Israeli in his mid-thirties, Shamir says directly that he’s never experienced Anti-Semitism, and when he says that he’s referring to the variety of prejudice that inspired the Holocaust. The Holocaust (reasonably) hangs heavy over all the film’s dialogues, even in less than overt ways. A group of high school students planning a major field trip to the Concentration Camps in Poland are emotionally prepared by a counselor who tells them they will meet people who don’t like them because they’re Jewish. When a girl in the group awkwardly says “hello” to a Pole at an historic site, he says something quirky to her and she construes it as a racist slur. A Rabbi in a later scene will explain, “Part of being Jewish is not fighting Anti-Semitism. Part of being Jewish is practicing Judaism.” Hereby drawing a line between the religion of Judaism and its attendant culture.

Shamir’s first stop in the states is the Anti-Defamation League (ADL), prestigiously headed by Abraham Foxman. A stately and patrician man, Foxman offers Shamir full access to follow him around, enter meetings and tail him on the most holiday-like business trip to the Concentration Camps imaginable. Standing next to the largest unmarked gravesite known from the Holocaust, we don’t see the diplomats practice a moment of silence. Instead, Shamir lets us in on their conversation—about Israel. As the diplomats say, “It could happen again,” famously reviled academic Norman Finkelstein, says the media is a flurry daily over the multiple instances of genocide taking place abroad. But the diplomats’ discussion leads them to the declaration that “Israel is our insurance policy.” Therefore, what threatens their insurance policy threatens them as a people.

That Shamir is Israeli gives him a platform for his inquiry but it’s not a free pass. The consideration he offers his subjects and their points of view suggests humility, and his charm certainly pulls you though the trenches. His subject is layered, but what stands out is how he manages language, as much of the arguments had in the film and about the subject are boardroom battles revolving around well chosen words. Ultimately, the film has a quirk and a gentility to it that makes an otherwise difficult or volatile subject seem too personal to disregard and too important to downplay.