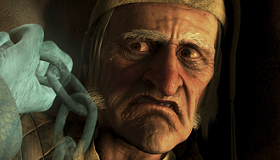 Technically far superior to his two previous directorial efforts in the Motion (a.k.a. Performance) Capture process ( Beowulf, Polar Express ), Robert Zemeckis has delivered a spectacular and extraordinary new 3D version of the greatest Christmas story of them all. Serving up a great treat for the holidays, the director has brought this Charles Dickens classic to such vivid life that in some ways you feel like you are experiencing it for the first time. With Jim Carrey taking on several roles including Scrooge, this new millennium telling of A Christmas Carol should fill Disney’s coffers with lots of jingle jangle for a very merry box office haul indeed.

Although it may be too dark and scary for the youngest tykes in the family, Zemeckis, who also wrote the adaptation, has effectively gone back to the core of Dicken’s venerable ghost story and married it brilliantly with the hybrid animation process known as Performance Capture. A Christmas Carol has been done to death in so many forms by everyone from Mickey Mouse to Barbie to Mr. Magoo to Bill Murray that this faithful retelling seems oddly overdue. Of course, Disney being Disney and Zemeckis being Zemeckis, it’s been wrapped in a process that takes Scrooge on a state-of-the-art thrill ride, perhaps the greatest time travel story of them all—which is appropriate since it is coming from the creator of the Back To The Future trilogy.

In addition to the remarkable technology on display—a technology that effectively heightens the tale’s fright factor—Jim Carrey is central to this film’s success. He not only takes on the central role of the famous curmudgeon, Ebeneezer Scrooge, but all the Ghosts, Past, Present and Future. Carrey treats the character very seriously, clearly drawing inspiration from Alastair Sim’s interpretation of Scrooge in the 1951 version, still the best live action take on the classic. Carrey’s vocal prowess is rich and varied, lifting the whole enterprise several notches with his amazing performance. Playing all the ghosts is a good idea, as they now logically appear as an extension of Scrooge rather than as intruders. Offering able support in the roles that are left is a stellar cast including Bob Hoskins, taking on both Fezziwig and Old Joe; Gary Oldman in several parts, but most notably as Scooge’s loyal clerk Bob Cratchit; Robin Wright Penn as the lovely Belle and Fan; Cary Elwes in multiple roles; and Colin Firth in only one role, nephew Fred, which he does briefly but quite affably.

The Performance Capture process has advanced leaps and bounds since the dead eye days of Polar Express, and in some cases it’s so realistic you are hard-pressed to believe these actors are being animated. Disney plans to play the picture exclusively in 3D—at least until Avatar comes along to steal many of the screens. In this case, the 3D process is dazzling and entirely appropriate for a highly visual cinematic experience that should keep any bah humbuggers in the audience to a minimum.