close
A proficient drama for the time of Obama 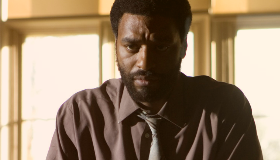 British film has something of a corner in an unremarked new movie trend: the low-budget, cinéma-vérité, fact-based historical drama filmed as political thriller. The granddaddies of the form are twin masterpieces: Pontecorvo’s The Battle of Algiers and Costa-Gavras’ Z, and there is some evidence the makers of Endgame, a solid if undistinguished recreation of the negotiations that ended white rule in South Africa, have watched Pontecorvo’s work in particular with special care. But it’s Paul Greengrass, the UK veteran and Bourne franchise director, who broke through in 2002 with the IRA drama Bloody Sunday, who is the patron saint of this mini-movement. Endgame director Peter Travis has emulated Greengrass’ aggressive handheld camera aesthetic almost to a fault, out of what seems like lack of faith in some fascinating material.

For despite some obligatory car chases and some cliché genre lines like “Trust no one” and “If this gets out I shall have to deny all knowledge and disown you,” this is mainly a movie about something anti-visual: men talking around tables. Fortuitously, the men in question include the great actor Chiwetel Ejiofor (still best known for his moving performance in Dirty Pretty Things ) and William Hurt in the pivotal roles of Thabo Mbeki and Willie Esterhuyse, the principal negotiators respectively on the ANC (African National Congress) and Afrikaner sides. Both actors turn in stunning and coolly emotive performances, with Hurt especially impressive delivering his lines in what sounded to these ears like a flawless dialect. Watching these two men reach warily across such a bitter divide in order to resolve the fate of millions is like watching two great boxers in the ring who weave back and forth and then suddenly embrace each other just before the deathblow lands.

There’s nothing in Endgame that’s less than proficient. If anything, this is a film that should have greater built-in appeal than Bloody Sunday in the Age of Obama, especially since American public opinion played a weighty role in bringing change to South Africa, and the events depicted are ones much of the audience can remember. Still, there’s a spark of passion and commitment in Greengrass’ work that Travis’ journeyman approach doesn’t largely reach. Reviews will be tepidly positive and dutiful, but any distributors interested in picking up this film shouldn’t expect the kind of passionate critical encomiums it’ll need to carry it to an audience beyond those with an immediate passion for the issues and era represented.