close
Less is more in this Americanization of an Italian favorite 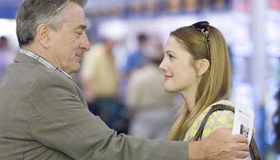 Remake of Giuseppe Tornatore’s Italian hit Stanno tutti bene, a road picture with Marcello Mastroianni as a widower visiting his grown children, has been faithfully retooled as a holiday vehicle. Robert DeNiro is splendid as a man coming to grips with the fact that he never spent much time with his kids. Fine name cast also including Drew Barrymore, Kate Beckinsale and Sam Rockwell should help lift this Christmas-themed drama to decent grosses for Miramax in select situations, but best returns will probably be down the line on DVD where you can spend an evening comparing it to the original.

DeNiro, who seems more interested lately in making box office hits than in trying to reclaim the glory days of his early acting career, has his best role in years as Frank, a recent widower who slowly discovers it was his wife who really had the relationship with their kids while he was rarely around. With the four of them now spread out around the country, his plan to gather them all in one place for Christmas goes awry. As they can’t come to him, he decides to take on a cross-country journey to visit each one individually. First up is busy wife and mother Amy (Beckinsale), followed by modestly talented orchestra musician Robert (Rockwell) and then free spirit waitress Rosie (Barrymore)—who tries to convince him she is better off than she actually is. The fate of the fourth offspring forms the core of the drama’s final act. All of these encounters are bittersweet but played with even more refreshing restraint and subtlety than Tornatore allowed in his version. Writer/Director Kirk Jones clearly knows what he has in DeNiro and wraps the drama around him without letting it get obvious or overly sentimental. If it sounds a bit like Paul Mazursky’s 1974 gem, Harry And Tonto (which won Art Carney a Best Actor Oscar), it does have some similarity, but DeNiro puts his own stamp on this road trip.

Some audiences may find the film moves a little too slowly for its own good but the naturalistic style fits the piece and allows DeNiro’s bigger moments to have greater impact. A meltdown on a jetliner is especially effective and poignant as is his chat with Barrymore shortly after he arrives at her apartment. It nice to be reminded what an enormously gifted actor Robert DeNiro can be. Of the grown kids, Rockwell is genuinely touching as a man who realizes he will never be exactly what his dad wanted and is just coming to terms with his own limitations. Barrymore and Beckinsale are more restrained than they often get to be on film and it works for both of them here. A brief sequence with Melissa Leo as a trucker who picks up Frank is also memorable, if all too short.

Americanized remakes of foreign hits often miss what made those properties work in the first place, but Jones, DeNiro and company know less is more in this instance and deliver a work that’s very fine indeed.