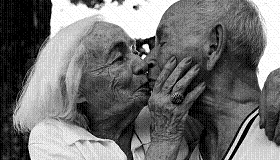 You can’t do survivors guilt soft. But watching the afflicted cry buckets when recounting one of humanity’s unpardonable atrocities isn’t going to keep a broad audience, either. New York Times reporter-cum-filmmaker Andrew Jacobs dealt with this dilemma straight on by quickly cozying his subjects to cameras (with a little help from documentary legend Albert Maysles) and allowing their day-to-day workings to move forward unhindered. The storied denizens of Four Seasons Lodge wax agony while tickling funny bones: this community of elderly Catskill visitors never drown in misery, but instead live out their days with fervor. This robust doc should command extended runs because auds will waltz with these 80-years-young wassailers who soar in their second chance at life.

Andrew Jacobs went to file a story for his broadsheet and fell into filming a feature. He lucked onto one of the last aging colonies in New York’s Catskills that was still sunsetting after other members had regrettably sold off their shares of the rolling hills. Many sour sellers want to hire a lawyer and wrest the remaining property back. Will the commune of co-owners call The Four Seasons Lodge home again? Or will this be the grand finale: a last chance to kick-up the heels and taste the gravlax?

The characters in the documentary play card games and dance the foxtrot but when they ante up or reach for a swig of Manischewitz the blue ink tattooed on their forearms unsleeves a serial numbered past. See, each Four Season’s Lodge resident did time in a concentration camp. All lost family and friends during the Holocaust. Once immigrated to the States they glommed onto each other and started a new family. A charismatic Lodger quips, “We are survivors and we stick together. We need that.”

The presence of death is in the air. Every frame. Whose funeral will be next? And then there’s the fate of the lodge itself. The collective favors a blitzkrieg to reclaim the property and pass it down to their children. They made this rustic sanctuary home and why should they just up and leave because a real estate baron is big bargain shopping?

Jacobs, as a jouno and new filmmaker, must have pursued the idea of shooting his subjects as a sort of companion to a series in print. But what became of the assignment was the remarkable closing of distance with these soulful characters. They open-up like Chinese takeout cartons. Jacobs provides an atmosphere for these tight-lipped elders to share intimate tales of their lives as well as partake in a little levity. They may be dolled up for dinner and dancing at the dining hall, or otherwise counting breaths, looking pasty white in a hospital bed. The tone is sweet and other times tart when there’s cause. The drama’s real but broken-up by quirkiness. When a key fails lodge president Carl squeezes his girth through a tenant’s window and opens the front door from the inside.

The threads of each person and friendships and romances that spun out of tragedy are not given token treatment. Rather, they’re purposefully drawn out. The wick on these stories may be slowly burning away. Oral histories have a beginning and an end, after all. The collective’s flame burns bright and disrupts the darkness of a time that too many would soon rather forget. Luckily, we still care to remember.