close
The Greatest Rock ’n’ Roll Band in the World? Uh, Yeah ... They Were 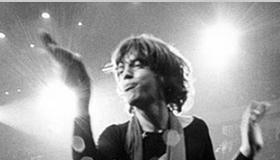 "Ever get the feeling you've been cheated?" That's what Johnny Rotten famously said at the close of the Sex Pistols final show in January 1978; it's also what an anonymous screening attendee sitting to my left said at the close of a Friday showing of Get Yer Ya-Ya's Out!, the "new" Maysles Bros. "documentary" on the Rolling Stones legendary 1969 live performances at Madison Square Garden. Frankly, I knew the feeling—at 27 minutes, GYYYO is somewhere between a teaser and a short—but it's vastly entertaining, and the glimpse it provides of the youngish Stones charisma and musical prowess is guaranteed to be catnip for anybody who has the slightest interest in rock ’n’ roll as we know it. Theatrical prospects are obviously limited, but the footage (apparently in a slightly different edit) appears on DVD in the just released 40th anniversary reissue box set of the famous concert album of the same title, which will doubtless show up in a significant number of baby-boomer Christmas stockings this season.

Essentially, GYYYO is a deftly re-jiggered version of all the Garden related footage that the Maysles left out of their classic Gimme Shelter in 1970. For those of you scoring at home, this means you get five complete live songs, including really riveting unplugged versions of two traditional blues numbers—Prodigal Son and You Gotta Move—with just Mick Jagger and Keith Richards. There are also excellent amps-to-eleven full band run-throughs of Satisfaction, I’m Free and Under My Thumb, plus some interesting backstage stuff—Jimi Hendrix talking guitars with Keith in the dressing room, Janis Joplin dancing in the wings. The real reason to see this, though, is a hilarious five minute scene of the photo shoot for the original Ya-Ya's album cover, filmed on a rainy street outside London as the ’60s wind to a close; everybody's high and giggling their asses off as drummer Charlie Watts, long-suffering good sport that he must be, is forced to get into a variety of silly costumes and ride around on a real ass. As an historical note, I should also add that the teenaged me was actually in attendance at one of those Garden shows back in 1969; I can't say for sure until I sit down with the DVD, but for one moment at least, future scholars of the period should note that I am nowhere to be seen in any of the audience footage.