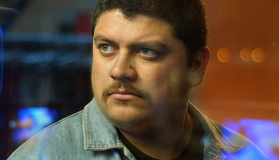 Gigante may be the first feature film of Argentinean-born director Adrián Biniez but he already claims the storytelling skills and painterly craft of a master filmmaker. Set in Montevideo, Uruguay, Gigante is a delicate, heartwarming romance about Jara (Horacio Camandule), a shy security guard at a sprawling suburban supermarket who falls in love with a pretty cleaning woman, Julia (Leonor Svarcas), just from watching her on his surveillance monitors. Jara is a mountain of a man, someone you would not want to meet in a dark alley. Yet, Biniez slowly transforms the bearish Jara into a lovesick puppy, the most sympathetic of romantic heroes and the big, soulful heart of his joyful debut feature. A Spanish-language artfilm of the highest order with an unknown cast and first-time director, Gigante, a collaboration of production companies Control Z Films (Montevideo), Rizoma Films (Buenos Aires) and Pandora Film (Cologne), will experience modest box office when Film Movement opens Gigante in specialty theaters in late November. Critical praise and enthusiastic word of mouth will attract larger audiences via home video.

Comedy has become a strong component of modern movie romances, especially with Hollywood productions, but Gigante claims just one random act of slapstick: when Julia accidentally falls over a towering store display of toilet paper. Instead of laughs, Biniez offers stunning images of the football field-sized supermarket and the Montevideo streets (Arauco Hernández Holz is the cinematographer), a steady tempo that comes close to real-time storytelling (Fernando Epstein is the editor), subtle emotions and an understated finale that shows bravery on his part. Gigante is the South American cousin to director James Mangold's 2005 American indie Heavy, another tale of shy love. It's every bit as poignant and artful as Paul Thomas Anderson's Adam Sandler romance Punch-Drunk Love. Winner of the Best First Feature Prize at the Berlin International Film Festival, Gigante confirms Biniez as an up-and-coming talent and a leading member of the New Latin American Cinema.

Argentinean actor Horacio Camandule makes his feature film debut after working with Biniez on his short film Total disponibilidad. His is a hand-in-glove performance, meaning it's impossible to imagine anyone else as Jara. With his broad shoulders and bulging belly, Camandule also makes Jara the most dynamic of romantic heroes, a shy man struggling to gain the courage to talk to a woman he finds attractive. In the film's best scene, Jara follows Julia to a movie theater and sits a few rows behind her; it's as if they are sharing in a secret date.

Leonor Svarcas, who acted in Biniez's short film 8 Horas and worked with him again as an actress and scriptwriter in Total disponibilidad, makes Julia a sweet, mostly silent, almost mysterious object of Jara's affection. She's a variation of Charlie Chaplin's blind flower girl, just as Gigante is a lovely reinterpretation of the mistaken identity romance at the heart of Chaplin's City Lights.

Unfortunately for Film Movement, Gigante is not Uruguay's submission for Best Foreign Film Oscar consideration. However, it will likely end up on many year-end top ten lists, which will help introduce foreign-language film buffs to the talented Biniez.

Film Movement opens Gigante in late November and plans a select platform release through the end of the year. It's an impressive addition to their repertory. While Biniez's romance may fail to match the profits of the year's top-earning foreign-language film, it will match the U.S. box office of the Spanish-language specialty release The Maid. After more audiences discover the film via home video, Biniez will slowly acquire a U.S. fan base that looks forward to his next project.