I Love You, Phillip Morris 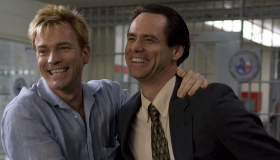 Will I Love You, Phillip Morris have a chance at the Oscars this year, or at the box office? That depends almost entirely on whether or not its central performance has been given by a man who is still an A-List film personality. The story itself—about Steven Jay Russell, a gay ex-cop who turns con man and then prison escape artist—is a tough sell, despite the fact that it’s rooted in a remarkable true story.

A character can be fascinating without being attractive, and the choice has been made in this quasi-biopic to use Jim Carrey’s charisma to paper over some very real questions about Russell’s sanity, if not the brilliance he displayed in his many daring and inventive escapes from incarceration while in pursuit of what the film presents as an unwavering quest for love. Carrey’s work deserves some sort of honorific though, even if the release of this intriguing if inconsistent movie comes at what for him is a rather delicate time.

It’s been a rough season for that benign demon called Jim Carrey—a Red Giant of a performer now sailing precipitously toward the Dwarf Star phase of his storied career. He will be blamed in part for the disappointing opening of the screaming mimi version of A Christmas Carol just unleashed upon the viewing public by Bob Zemeckis and the Walt Disney Company. The unbearable ugliness of that picture’s character design and its bludgeoning 3-D chase scenes were perpetrated on Carrey’s performance(s) in a labored post-production process he wasn’t even a party to.

What has Jim Carrey ever done but give us everything he has, every time he appears in a movie? What other actor of his popularity has so consistently steered himself toward not only major mainstream entertainments but also tricky character pieces distinguished by their offbeat sense of fun and their refusal to be easily categorized as “significant” (i.e., Oscar-worthy vanity projects)? Eternal Sunshine of the Spotless Mind might be the best American romantic comedy of the past 20 years, as well as the most intricate and moving one. Man on the Moon took a loathed but influential comedian and left the riddle of his being essentially intact. The Truman Show gave us a fable for the reality television age before reality television fully existed.

And now we have I Love You, Phillip Morris, a gay fable of identity poised at times uneasily between comedy and drama, but redeemed by Carrey’s unswerving commitment to his besotted con man—yet another rubber faced loon with chaos, misrule and the mess of real emotion contending for mastery of his heart.

Though writing/directing team Glen Ficarra and John Requa frequently either miss or gloss over the deeper thematic possibilities in their source material (for what is a gay con-artist preying upon straight society if not a ready-made metaphor for the inability of the wider world to accept gay individuality?), they struck gold when they plugged Carrey’s deranged showman energy into their film. He makes choices another actor would either balk at or play in the muted self-congratulatory tones of Brokeback Mountain, consuming everything he touches in the eternal flame of his bizarre gift. When Carrey is onscreen, everything about the giddy, conflicted man he’s been asked to embody is either amusing, sympathetic or true.