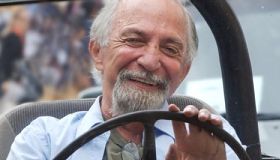 Josh Ross (Moscow) has all the cliché characteristics of an L.A. talent agent: slick hair, the ubiquitous Bluetooth in the ear, constant talking on the phone. He's the ugly American incarnate and is unhappy about being sent to Guatemala on assignment. His task is to find and an offer a job to the retired, Oscar-winning actor Jack Palladin (Gazzara), a man who was once married to Ross' late mother. Once Ross finally meets Palladin after a series of culture-shock mishaps, the young agent learns a few things about his family, especially his estranged father and his surprising ties to the ex-pat actor.

Looking for Palladin follows classic comic premises as an odd couple/buddy tale involving the brash agent and the laid-back veteran actor as well as a flustered American traveler off balance in a foreign land. Specialty audiences will appreciate the feel-good nature of Krakowski's storytelling. However, the film's complete predictability in the closing moments involving Ross and his estranged father drains much of the appeal of watching Gazzara's onscreen return.

The Polish-born Krakowski has proven his storytelling skills before as a successful producer, screenwriter and director of the documentaries The Politics of Cancer and Farewell To My Country. His technical skills, first learned at the Polish National Film School, are solid. He generates solid work from his crew, especially cameramen Alberto Chaktoura and Giovanni Fabietti, and produces an impressive lead performance from Gazzara. Looking for Palladin may be his most mainstream work but it's also his most cautious. Without a single surprise, Looking for Palladin quickly loses its emotional grip despite Gazzara's quality work.

Vincent Pastore ( The Sopranos ) and Talie Shire (the Rocky series) offer familiar faces but little emotional boost as some of Palladin's fellow ex-pats. Experienced character actor David Moscow receives the most screen time as the film's key character but fails to hold the film together. Moscow looks the part but there's little emotional substance beneath the slick façade.

Looking for Palladin 's greatest selling points are Gazzara in a major role and its stunning Antigua locations as the first U.S. film to be shot in Guatemala. Marketing campaigns that promote Gazzara's comeback in a starring role will improve its chances with older specialty audiences who remember the 79 year old actor from his films with John Cassavetes ( The Killing of a Chinese Bookie ) as well as his TV work. These same moviegoers will leave theaters wishing Gazzara had starred in a better film, which makes Looking for Palladin a misstep in Krakowski's prolific film career.