close
Too formulaic to fit its budget 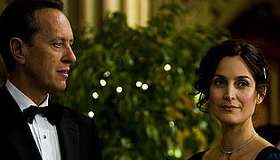 When you consider 2009’s sorry slate of romantic comedies ( New in Town, anyone?), the problems with Barra Grant’s Love Hurts are easier to forgive. Hand a studio $40M and Katherine Heigl and you’re pretty much assured of a schematic tale of female empowerment as defined by a woman’s ability to land a man. Hand an independent producer $7.5M and a young indie cast, however, and you’re happily watching (500) Days of Summer. Grant’s film, the most high-profile project for this 1970s actress turned writer turned writer/director, costs even less. And the movie, about a Long Island doctor reeling after his wife leaves him, does show glimmers of promise. But the demoralizing and generally lame over-the-top humor feels targeted to studio sensibilities, as if Grant is trying to prove she can run with the biggest names in romcoms. Love Hurts never escapes that unconvincing middle ground, although it makes you wonder what Grant would do if handed $7.5M, a young, indie cast and permission to indulge her less formulaic impulses.

Men and women process breaking up differently and most romantic comedies focus on the ladies. Here, Grant takes the quivering and the tears and the pity and assigns them to the guy. Ben (Richard E. Grant, possibly because Hugh Grant was too expensive) is a Manhasset ear, nose and throat doctor whose longtime wife is landscape artist Amanda (Carrie-Anne Moss). With teenage son Justin (Johnny Pacar) about to leave for college, their marriage has reached its dead shark phase. At least it has for Amanda. Staring out her kitchen window at her unfulfilled dreams, she’s empty and unsatisfied. But Ben is so oblivious to her despair that when he learns Amanda is seeing a shrink, he thinks it’s to discuss her mother. Soon, Amanda has moved out, leaving a Dear John letter thicker than a thesis paper. Ben can’t understand why Amanda bolted and thinks plastic surgery might ease her marital angst. Ben’s cluelessness can either be played for great laughs or great conflict. Here, it’s neither and these early scenes presage what will and won’t click in Love Hurts. As Amanda, Moss is the only performer who doesn’t realize this is a romantic comedy and thank goodness for that. She’s the ballast, the film’s broken, beating heart. But Grant (the director) bets everything on Grant (the actor). The Swaziland-born star of Withnail and I uncorks that specific brand of British befuddlement that should have been doled out more conservatively. Grant is a card the director overplays, even before he gets a jellybean in the eye and even after he puts a jock strap on his head.

With Amanda enjoying the favors of a hunky, shirtless local, Ben wallows in his own pathetic crapulence (his drink of choice is the sloe gin fizz) and plays video games with Justin and his Central Casting group of bickering buds. Taking pity on pop, Justin oversees the Pygmalion-like transformation of his father into a middle-aged Lothario who sports $285 haircuts and designer threads. With the rejuvenated Ben juggling a hot pants-wearing nurse (Jenna Elfman), a Jewish personal trainer (Janeane Garofalo) and buxom, twin karaoke singers, he returns the favor by helping Justin pursue a beautiful Russian ballerina (Olga Fonda). Call it a postmodern spin on the ’80s body switching genre, where a supernatural force causes father and son to swap bodies. Here, they swap the bits of their experience that benefit the other. Which is not to say Love Hurts is any more realistic than 1988’s Vice Versa. Any normal 17 year old boy would hurl upon learning of the bed-hopping ways of his father. Abetting it is downright weird. And it’s a good thing Justin is already a handsome young chick magnet, because Ben’s displays of emotional fragility would embarrass Robert Bly.

Grant, who also wrote the script, draws clean character lines and effortlessly navigates three narrative threads. This is not muddy storytelling, just bipolar and unconvincing, as Grant force-feeds us comedy to soften us up for the emotional kill. She gives her lead actor too much latitude, intent on taking full advantage of a casting coup. Grant spits, drools, cries and sings as if performing the comedy version of Jason Statham’s character in Crank. But Love Hurts comes alive when the mugging stops. Late in the game, there are nice moments of regret and longing that are more genuine then when other films of this type hit those same beats. Still, Ben’s plan to win back Amanda has less to do with committing to a more fulfilling future than reminding her of their shared and happy past. The former is harder to dramatize, while the latter leads to silly and false notes better suited to lazier, bigger budgeted product. Indeed, Ben teaches Justin a lot about love, including the most important lesson of all: don’t toss your old Halloween costumes. Your marriage might depend on it.