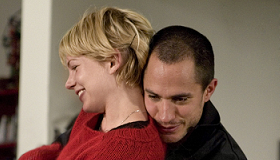 For his first English language sortie Swedish director Lukas Moodysson tackles the theme of globalization—and falls distinctly flat. The treatment is heavy going and pretentious, making it unlikely for him to find favor even among supporters of the cause. Prospects in the box office would seem to be fairly limited.

His heart and concerns may be in the right place but director Lukas Moodysson makes heavy weather of the theme of globalization. His own description of the film (“it is about how all of us on this planet are interconnected with each other”) is enough to give pause. There is much more of this sort of glib sermonizing in store.

His main focus revolves around a successful New York couple, Leo (Gael García Bernal from the The Science of Sleep and The Motorcycle Diaries ) and Ellen (Michelle Williams of Brokeback Mountain fame). Leo is the creator of a booming website and has stumbled into a world of money and big decisions. Ellen is a dedicated emergency surgeon who devotes her long shifts to saving lives.

Their 8 year old daughter, Jackie (Sophie Nyweide), spends most of her time with her Filipino nanny, Gloria (Marife Necesito). This is a situation that makes Ellen start to question her priorities. When Leo travels to Thailand on business, he unwittingly sets off a series of events that will have dramatic consequences for everyone as he discovers another downside of globalization—the sex trade.

Moodysson, who won acclaim for his 1998 film Show Me Love and Lilya 4-ever in 2002, uses such contrasting images such as a stuffed refrigerator full of fruit and food and the luxury lifestyle of New York, with the poverty and deprivations of the Philippines and Thailand.

It is all too simplistic and obvious and increasingly the preachy tone becomes irritating. At its premiere showing at the Berlin Film Festival in February 2009, the reception was decidedly frosty which does not bode well for its effect on audiences.