close
Fan boys will flip for this bloody flick 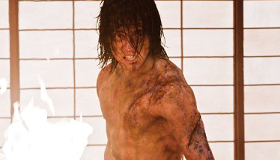 Director James McTeigue re-teams with his V for Vendetta producers Joel Silver and brothers Andy and Larry Wachowski to mine countless ninja video games, anime and decades worth of martial arts movies for his bloodied action movie, Ninja Assassin. Working with screenwriters Matthew Sand and J. Michael Straczynski (from an original story by Sand), McTeigue provides enough wire-fu fights and stylish gore to please the fan boys who expect ample bloodletting from an R-rated action movie. Casting Korean pop sensation Rain as the lead ninja, Raizo, will deliver a core Asian fan base, especially young women, to the movie. An example of holiday counter-programming at its goriest, Warner Bros. will experience strong support from young male action buffs but poor reviews will hamper chances at blockbuster-level, crossover business.

A young boy trains under the leader of the secret Ozunu Clan (martial arts veteran Sho Kosugi) but escapes after his fellow student and girlfriend is killed. Now an adult living in Berlin, Raizo (Rain) faces off against his former ninja brothers when he helps pretty Europol agent Mika Coretti (Naomi Harris) track down the Ozuna Clan and stop their business of assassinations-for-hire.

McTeigue and his extensive team of stunt coordinators keep the action crisp and the bloodletting stylish throughout Ninja Assassin, a movie that has already spawned an iPhone/iPod touch game application. Its standout sequences which include a gory battle between young yakuza and ninjas at the start of the film, a frantic fight between speeding cars on a busy Berlin motorway and the climactic battle between Raizo and his teacher in a burning mountaintop retreat, offer slick violence equal to a Takashi Miike film and a level of brutality worthy of the great Kinji Fukasaku ( Battle Royale ).

Ninja Assassin features the familiar plot of a student rebelling against an evil master, it’s a plot that’s easy-to-follow thanks to popular ninja video game and numerous martial arts movies. It's hard to fault Sand and Straczynski for wanting to upend a proven formula. A series of flashbacks explaining Raizo's past drags down the middle of the film and prevents Ninja Assassin from becoming a modern martial arts classic on the level of the Kill Bill films or Crouching Tiger, Hidden Dragon.

Naomie Harris ( Pirates of the Caribbean: Dead Man's Chest and At World's End ) deserves credit for bringing a strong female presence to the testosterone-heavy movie. Harris makes her Europol forensics detective strong, brave and willing to face whirling blades and non-stop gunfire. Sho Kosugi squeezes every ounce of melodrama out of the flashback scenes of candlelight instruction and sadistic blood rituals. Granted, the dialogue may be laughable at times but it's still a joy to hear Kosugi deliver the words with his raspy voice.

Rain, who starred in the Wachowski Brothers film Speed Racer, kicks the film to life whenever he appears onscreen. Rain is charismatic and impressively buffed as the film's baby-faced assassin and ruthless as a master killer with a weapon resembling a flying guillotine. While a sequel for Ninja Assassin is unlikely, despite being set up for one, expect more Hollywood work for the talented 27 year old Korean pop star.

At times the film's severed heads and gushing blood bring to mind the faux trailer for the Eli Roth horror Thanksgiving. After all, just how bloody can a Hollywood holiday release be? (Warners moved Ninja Assassin up from a planned 2010 release.) To their credit, Silver and the Wachowski Brothers understand fan boys who will drive earnings above the previous Silver/Wachowski production Speed Racer. The promise of extensive bonus clips means these same fans will also line up for Ninja Assassin on home video making bloody ninjas a good business movie for Warner Bros.