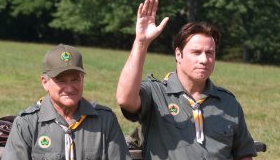 Trying to recapture the freewheeling box office success of Wild Hogs, John Travolta has reteamed with director Walt Becker and they have enlisted the comic antics of Robin Williams to turn this Disney family comedy about a couple of friends and business partners who temporarily inherit 7 year old twins into an often riotously funny slapstick farce that ought to appeal to moviegoers of all ages. This Thanksgiving holiday entry should have plenty to be thankful for indeed, once box office returns are in.

Williams and Travolta play longtime friends Dan and Charlie, carefree bachelors and business partners who are on the verge of closing the biggest deal of their careers with a Japanese conglomerate. Complicating matters though is Williams ex (Kelly Preston) who turns up unexpectedly after seven years and tells him he is actually the father of her 7 year old twins (Ella Bleu Travolta and Connor Rayburn). Due to major personal problems Preston asks Williams to take the kids off her hands for a few weeks and suddenly he and Travolta find themselves preoccupied with an unexpected leap into joint fatherhood just as business concerns pile up. What follows is pure slapstick presented at a breezy pace and offering Williams and Travolta a chance to let their comic chops run wild. Among the highlights are a break-in at the zoo with a business pal (Seth Green) wherein a search for the kids makes them cross paths with a lovelorn gorilla and some not-so-sweet penguins. There’s also a big comic set piece at a scout camp outing where the men compete in some rough one-upmanship with the other fathers on the site.

Predictably the film gets sentimental when Williams realizes he likes this father thing and agonizes over giving up the kids when his business deal forces him to move to Japan for six months. Like most Disney comedies of this ilk, the film effortlessly mixes over-the-top comedy with heartwarming moments that Williams in particular seems to have trademarked. Robin’s in great form and has terrific chemistry with Travolta as they manage to recall a modern-day Abbott And Costello. Travolta seems to be having a ball not taking anything seriously and playing off Williams to maximum comic effect. In fact it’s a Travolta family affair, as daughter Ella Bleu makes a sweet movie debut as one of the kids and wife Kelly turns up for support as well, although her scenes are mainly with Williams. Stealing every scene he’s in, though, is Green who could probably turn mugging into a national pastime. His exaggerated reactions during a disastrous golf game and especially in his romantic entanglement with the aforementioned gorilla are guaranteed laugh-getters. There’s also nice, if brief, support from Matt Dillon, Justin Long, Rita Wilson and the late Bernie Mac, who all seem to be doing the gig for the fun of it.

Old Dogs may not reach the box office heights of Wild Hogs but its fun family friendly attitude should guarantee a healthy holiday haul.