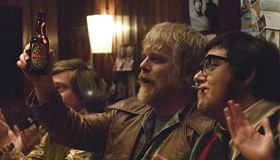 This blast of Sixties nostalgia, derived from the days when pirate radio ships broadcast off the coast of Britain with a motley crew of dee-jays, should appeal to ageing music freaks and fans of Brit-pop. It doesn’t have the same broad appeal, however, of writer/director Richard Curtis’s previous winners Love Actually or Four Weddings and a Funeral (the latter of which he wrote). Expect distinctly lesser returns and more limited resonance.

Although it is more likely to create a bit of a box office storm on its home turf, the second directorial outing for Richard Curtis, Pirate Radio, may make heavy weather of its voyage across the Pond, where audiences do not have the same historical perspective and nostalgia for the era of pirate radio ships. In the ’60s, the seas around Britain were awash with these bobbing hulks full of assorted dee-jays who, operating outside territorial waters, gave listeners a blast of pop music while the staid and Government controlled British Broadcasting Corporation (BBC) basically turned their heads.

The rusting fishing trawler Radio Rock is based on the legendary Radio Caroline, which pumped out pop around the clock in an atmosphere of sex, drugs and rock ’n’ roll.

Among the bunch are Philip Seymour Hoffman as an American whose language turned the airwaves blue, Rhys Ifans oozing disheveled cool, Chris O’Dowd as a loquacious Irishman, Tom Brooke as a challenged space cadet and Bill Nighy lording over them all as the Captain. Mix in the likes of Kenneth Branagh as a Government minister trying to curb their antics and Emma Thompson as the mom of a young aspiring vinyl spinner (Tom Sturridge) and the foundations are there for some ensemble sparks.

The trouble is that sparks are all you get. Curtis, whose roots were in sketch writing, fails to provide the film with a strong narrative. Most of the humor stems from one-off situations rather than an inherently robust story, all of which makes for a bumpy sail.

The sense of the period and Sixties style is immaculately recreated as the action shifts between ship and shore where millions of youngsters tuned in to the outlawed band of renegades, many of whom later progressed to become legitimate household names on the national broadcaster and helped to shape the network as it exists today.

The inclusion of Hoffman may lend some Stateside appeal alongside Curtis’s reputation as an astute creator of a string of box office hits. Just don’t expect it to make too many waves. And be prepared, for at 129 minutes it overstays its welcome.