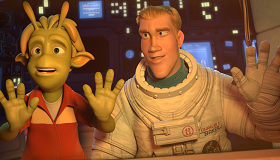 Planet 51 is one of those movies with no real, natural audience, a family comedy that is not really for kids with humor too mild to appeal to many adults. A gentle riff on the alien invasion movies of the ’50s, it is an amiable trifle about a U.S. astronaut who lands on what he thinks is an uninhabited planet in a far-off galaxy. The astronaut ultimately finds himself in the unaccustomed role of ‘feared alien’ on a planet full of green people who seem to exist in an alternative 1950s universe. A sharper satire might have pulled in Sci-fi buffs, but instead this is strictly for the family crowd, and in a year that has been jam-packed with animated features (many funnier than this one). Blockbuster numbers seem unlikely, but with few child-friendly alternatives in theaters, box office returns should be healthy.

Soon after Captain Charles T. Baker (Dwayne Johnson) lands on the titular planet, he finds himself a hunted man in a world certain he’s out to enslave it. Only 16 year old science geek Lem (Justin Long) and his friends, comic book fan/conspiracy buff Skiff (Seann William Scott) and 7 year old Sci-fi fan Eckle (Freddie Benedict), know the truth. Far from being an evil invader, the spaceman is friendly, a bit vain, somewhat thick and desperate to return to his mother ship before it begins its return voyage to earth without him. He also proves to be a fount of romantic wisdom for Lem, as the teenager agonizes over the best way to win the heart of girl next door, Neera (Jessica Biel).

The movie opens with an alien invasion movie parody, a kind of parody of the parody. Screenwriter Joe Stillman ( Shrek, Shrek 2, Beavis and Butt-Head Do America ) has obvious affection for those old movies and his creation of the bizarre ’50s world touches on other affectionate throwback films like Back to the Future and Pleasantville. But the humor is bland and so are the characters. Despite the best efforts of vocal talents like Johnson, Long and Scott, neither the earthling nor the Planet 51-ites evince much personality. The only character that does is Johnson's rolling space probe, a rover called Rover who has all of the characteristics of a canine companion.

Planet 51 does stand out in one area and that is in design. Fans of Googie architecture of the 1950s and ’60s will appreciate the way the movie pays homage to it in the planet's buildings, which are at once retro and futuristic. The cars, which are rounded sort of hovercrafts on wheels, are similarly inspired. The design, in fact, is the wittiest element of the movie. If as much care had gone into the story and the characters, Planet 51 might have been enchanting. Instead, for a tale that takes place in a galaxy far, far away, it remains resolutely earthbound.