Precious: Based on the Novel "Push" by Sapphire 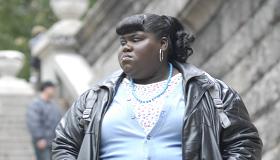 Some films arrive at Sundance expecting to be great, and some the festival thrusts greatness upon. Foremost of these in 2009 was Precious: Based on the Novel "Push" By Sapphire, director Lee Daniels’ harrowing cross between an inspirational teacher genre exercise, a Ken Russell fantasy film of the ’70s and the child abuse melodrama Hound Dog. Overloaded a bit by Daniels’ laudable visual ambition and distinguished by an unflinching view of ghetto life that has nothing to do with standard Hollywood liberal postures toward deprivation and/or blackness, Precious is also (and foremost) a stunning acting showcase, not just for newcomer Gabourey Sidibe, who absolutely soars as the abused high school student Precious Jones, but also for comedian Mo’Nique in a stunning tour de force as Precious’ abusive mom.

It’s the ’80s, and Precious is a study in unexplored human potential. Morbidly overweight and functionally illiterate, she leads a vast and poetic internal life via a fantasy reflex that transports her to a shiny world of klieg lights and thrust stages where she can pretend to be beloved, talented and a nascent superstar. Precious uses these fantasies to insulate herself from the harsh realities of her world: humiliating gangs, random street violence and an abusive father who has been sexually assaulting her since she was three, with two resultant pregnancies. With her father largely absent, the gorgon in Precious’ daily life is her mother, a bitter recluse living on Welfare who routinely beats Precious out of warped romantic jealousy. A series of school teachers and social workers help Precious to move past her sad state, inspiring her to write out her own story as a way of changing her life.

Daniels has made a remarkable series of bold choices, all of which seek to depict Precious honestly and without the usual self-congratulatory showbiz cant. At times, Precious fantasizes without guilt about being white, so much so that it’s a white model’s features she sees in her own bedroom mirror. Precious is also not above petty thievery, stealing her own file from a social worker’s office and a bucket of chicken from a fast food store. In a sense, Precious is a more ambivalent and less idealized version of the little girl from Doug Atchison’s excellent (but far lighter) Akeelah and the Bee ; someone trying to get over an environment that’s toxic to her aspirations and her dreams.

Despite her almost flamboyant largeness (which Precious sees as a natural reaction to Precious’ horrible home-life) and the sometimes melodramatic twists her story takes, Sidibe’s Precious is so startlingly truthful and so subtle she seems to have stepped out of a documentary to make her appearance here. Totally believable performances are also turned in by both Lenny Kravitz (as a male nurse) and Mariah Carey (as a tough but tender social worker), with Carey in particular disappearing so completely into her drab but sassy workaday messiah that the watcher’s mind keeps saying: “That can’t be her!”

But the almost certain 2010 Oscar nom for all of this (predictable even today, on the day the 2009 noms were just announced) belongs to Mo’Nique, whose alternately horrifying and devastating performance humanizes a monster. The last ten minutes of Precious are devoted to a revelatory confrontation between mother and daughter, and Mo’Nique’s bravura transformation, from opportunistic schemer to shattered woman unable to face an unlivable truth, is so unerring it literally makes the viewer gasp. Daniels, who produced Monsters Ball and shows a similar belief in giving his actors room to explore, has captured a performance here that can stand with the best ever committed to film. It simply should not be missed.