close
Even abridged, this epic delivers glory and gravitas 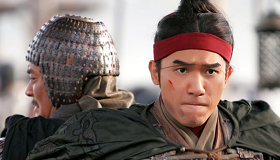 That the most successful film in John Woo’s career should receive a belated and truncated release in the U.S. speaks volumes not simply about Woo’s relationship with Hollywood, but about a more general American inability to appreciate and embrace all things foreign. Not that Woo and company need any further validation from the American market—in its original two-part, 280-minute incarnation, the film has already grossed more than $230 million. But better-than-average earnings for Magnolia genre division Magnet should still serve to send a bitterly unwelcome message to the disconnected, bean-counting studio suits who originally deemed the opus insufficiently commercial for broader release.

Set during China’s Three Kingdoms era (circa 209 AD) Red Cliff centers around a legendary military clash wherein the united forces of two southern Chinese warlords—Liu Bei (Yong Yu) and Sun Quan (Chen Chang)—successfully fended off an assault by the vastly superior forces of the ambitious northern warlord Cao Cao (Fengyi Zhang). This success foiled Cao Cao’s scheme to consolidate power in the hands of a Han Emperor (Wang Ning) he had hoped to control or usurp. Based largely on 3rd Century politician Chen Shou’s Recrods of the Three Kingdoms as well as on the more romanticized 14th Century novel, Romance of the Three Kingdoms, Woo’s very impressive “international cut”—which halves the full running time to a single 148-minute film—very smartly exploits a variety of popular genre conventions. Imbalanced battle scenarios, especially those in which the outnumbered or outclassed manage to prevail, have already given the movies multiple tellings of the Alamo and the 300 Spartans, as well as the likes of Braveheart, Lawrence of Arabia and countless others. Few, however, can equal the sheer numbers involved in Red Cliff. Outnumbered more than four-to-one (conservative estimates say Southern forces numbered only 50,000 while Northern forces were close to 250,000), Liu Bei and Sun Quan oversaw an effort that continues to be regarded as one of the great military triumphs in history.

Woo’s complete epic features a detailed accounting of the many intrigues and subplots leading up to the battle, as well as an exacting recreation of the conflict itself. The American release sacrifices almost all of the lead-in and much of the subsequent nuance to deliver what basically amounts to a two-and-a-half-hour battle sequence. Fans of epic war films may recall that something similar was wrought on Sergei Bondarchuk’s massive 1967 recreation of War and Peace, which was shorn from its original 8-hour running time to a still-daunting sub-7 hours for American release. Woo, however, has given this abridgement more careful attention, reordering some sequences and even adding new footage in some scenes to maintain some semblance of narrative integrity. It’s the way the story is distilled on a personal level, however, that makes Red Cliff work at almost any length, telling the tale through the friendship between Zhou Yu (Tony Leung), Sun Quan’s Grand Viceroy, and Zhuge Liang (Takeshi Kaneshiro), Liu Bei’s chief advisor and ace strategist. Further emphasis on Zhou Yu’s passionate relationship with his wife, Xiao Qiao (Lin Chi-ling) and narrative integration of Xiao Qiao’s efforts on behalf of her husband at a crucial moment in the conflict, facilitate a rich emotional subtext to the proceedings which, in turn, give the historical import even greater gravitas.

Not that there’s anything particularly original in the twists and turns—a somewhat predictable mix of Shakespearean intrigue with genre conventions common to numerous prior Chinese historical epics—but Woo’s enthusiasm for the material, his first Chinese-language film in more than a decade-and-a-half and his first period film since 1979’s Last Hurrah for Chivalry, explodes with the unrestrained ebullience of a grown man who’s just rediscovered a beloved childhood toy. At times it’s over-the-top, elsewhere meticulously restrained—the kind of uneven execution even Woo’s most faithful fans have come to expect—but never, even with major subplots deleted, do the characters fail to compel the audience’s attention and empathy. Woo’s trademark affection for such traditional ideals as honor, dignity and sacrifice bleed from the screen like proudly-suffered war wounds, gladly dragging viewers into the fray like eager conscripts.

Kaneshiro and Leung—both gigantic stars in Asia, and not without their fans in the U.S. —are flawlessly cast here, exhibiting the kind of masculine chemistry typical of Woo’s very best films of the ’80s. Supporting performances and contributing technicians are likewise impressive, all of them making the most of the more than $100 million reportedly spent on the production. Compare that to the more than $70 million allegedly spent on Couples Retreat and it’s quite clear audiences are getting more than their money’s worth. It’s just too bad that American audiences had to wait this long only to see half the story.