close
An inspired flight of fancy about a little angel 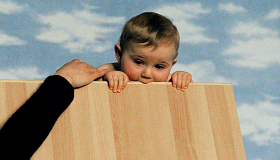 In the ancient Greek myth, Icarus flies too close to the sun and his wings melt. In Ricky, French auteur François Ozon's quirky melding of fantasy and kitchen-sink drama, a baby flies too close to the lights of a warehouse store and turns a private family matter into the stuff of tabloids. The film, which made its United States premiere at the Mill Valley Film Festival, is very funny in its flights of fancy and ultimately quite poignant. It is a small and eccentric movie, but the filmmaker's dedicated following and the curiosity of adventurous arthouse buffs will ensure at least limited box office success.
When single mom Katie (Alexandra Lamy) meets Spanish immigrant Paco (Sergi Lopez) at the grim chemical plant where she works, their connection is immediate. In short order, he moves in with her and her 7 year old daughter, Lisa (Melusine Mayance), and the family soon expands by one after Katie gives birth to their son, Ricky (Arthur Peyret). Their relationship quickly sours when Katie spies bruises on the baby's back. It is only after the breakup that the real cause for the marks on the child appears, and wings sprout from his shoulder blades. The baby's condition is a secret that mother and daughter keep until that day in the store when Katie turns her back for just a moment and Ricky sheds his jacket. Like a moth, he heads straight for the lights.
Based on a short story by English writer Rose Tremain, Ozon embarks on a delicate balancing act. The drama is often grim, particularly after Katie first gives birth and the baby cries constantly; and then again, after the world discovers Ricky's secret. But when Katie and Paco fall in love and when Katie and Lisa take such delight in Ricky's special qualities, it’s downright sweet. Once the baby's wings sprout, evolving from what look like plucked chicken wings to a magnificent, feathered span nearly as big as he is, the movie moves into comic territory.
Lamy and Lopez are both excellent, but it is the children that make Ricky special. Much of the movie is told through Lisa's point of view. She is a quiet child, but smart and observant, and little Mayance conveys a whole wealth of emotion through her solemn eyes. Peyret is simply adorable, with or without wings. Ricky is the rare arthouse drama that is as effects-driven as a Hollywood blockbuster, meanwhile its scale is smaller, more intimate. Ozon is not looking to inspire awe, but tears, laughs, and some "ahs." In that aim, he succeeds.