close
Important and well made 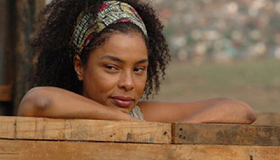 Skin is the true tale of an African girl, Sandra Laing, born, literally, to two white South African parents in 1950’s apartheid South Africa. It is the most serious of dramatic narratives and less obscure a circumstance than one might expect. At the time it was presumed that Sandra (played as a young girl by Ella Ramangwane) was the result of an affair between Sannie (Alice Krige), her mother, and an African male, which in-and-of itself would have been a violation of the law. Fortunately science was just advanced enough at the time to confirm that Sandra could be, and in fact was, the offspring of two ostensibly white parents, her father being Sannie’s husband, Abraham, played by Sam Neill. In a landmark court case Sandra was actually declared to be a “white” person, despite the fact that she was demonstrably black. As a memoir, Skin represents a history of a time in the world that many would just as soon forget; as a film it’s pure dramatic storytelling that’s worth a good deal more than it will likely earn at the box office— which does not diminish its value either as history or drama one cent. Here we have and important and well made film.

The film covers some thirty years of Sandra’s life, but for the most part is about the actual trials of Sandra’s young adulthood, as played by Academy Award nominated actress ( Hotel Rwanda 2005) Sophie Okonedo. Sandra’s journey involves her coming of age in a white family and white community with her fundamentally benevolent and loving parents and their fundamentally “white” values—which they wholly intend to pass along to their black daughter. They would have Sandra behave and think as a white person does, in every way, this despite the fact that they are plainly not so white, themselves. The film might have benefited from a deeper exploration of this bit of self-delusion on the part of Sandra’s parents, or on the nation of South Africa in general for that matter, but this is a personal story and thus these larger themes are not explored.

Sandra spent hours trying to wash and bleach herself “clean” so that she might match her family and her society, including her definitively white brother and her classmates in her all white school. As a young woman, Sandra becomes an introvert and for a very long time has no idea who she is. Her parents, particularly her father, continue to pressure her to identify with her white upbringing even as the rest of society clearly sees her as black, and therefore restricted in ways that all black South Africans were restricted at the time. Then Sandra falls in love with a black African man, Petrus (Tony Kgoroge), and the line of distinction about whom and what she is—is drawn boldly and in color.