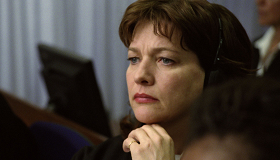 The courtroom has been a staple of some classic films, but Hans-Christian Schmid’s drama is not one of them. Dealing with war crimes in Bosnia and flitting back and forth between there and the courts in The Hague and Berlin, the film spreads itself too thinly and, despite the subject matter, fails to grip. One can expect numbers to be small.

When prosecutor Hannah Maynard (a feisty performance from Kerry Fox) is at a tribunal in The Hague she attempts to convince a potential witness to testify in a crucial case against the man accused of deporting and killing Bosnian-Muslim civilians in a small town now known as the Republika Srpska. Quickly she becomes embroiled in a labyrinth of subterfuge and counter-claim.

The prosecutor is determined to make Goran Duric (Drazen Kühn) pay for his crimes. When one of her key witnesses, Hajdarevic (Kresimir Mikic), breaks down in court, eventually committing suicide, Maynard decides she must go to Bosnia to find more evidence and witnesses or risk defeat.

In the course of her inquiries, Maynard uncovers a much worse crime perpetrated by Duric. Her dilemma is to find someone to testify to a rape and murder that happened in a hotel. She manages to convince the sister of a witness, Mira, (Anamaria Marinca, 4 Months, 3 Weeks and 2 Days ) to exorcise her demons and testify in The Hague.

Duric's defense team attempts to have Mira's testimony disallowed and Maynard finds that the members of the judiciary unexpectedly support their efforts.

Maynard’s struggle is only just beginning  and on a much wider arena than she ever imagined.

Hans-Christian Schmid marshals his material on an epic canvas whereas the subject might have been better suited to a more intense and contained treatment.

With a sinewy performance from Fox and an affecting one from Marinca, as well as proficient technical credits, Hans-Christian Schmid occasionally allows the power of the story to win—though but a simpler framework would have served it better.