close
Could be Bullock’s Erin Brokovich 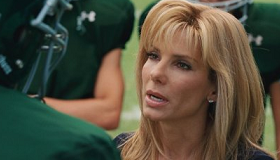 Uplifting if overlong sports tale is an inspiring and extraordinary true story about a homeless African American teen taken in by a rich southern family and groomed for football glory. With a career-best performance by Sandra Bullock and a terrific new talent in Quinton Aaron, The Blind Side represents smart counter-programming from Warners against the New Moon juggernaut on November 20th. Although likely to be dwarfed opening weekend this unforgettable tale of an unlikely human connection could turn in some nice numbers if word of mouth is given time to grow.

Bullock plays a real life, determined and well-to-do white southern woman, Leigh Anne Tuohy, who convinces her husband (Tim McGraw) to take in Michael Oher, a homeless, young, black classmate of her daughter. The family later “adopts” him and nurtures him on the path to a successful high school football career. As he becomes a part of the family, complications arise and his promising college prospects are almost derailed by his lack of education. Tuohy hires a warm-hearted tutor (Kathy Bates) to help him along and the path is set for what eventually turns out to be to creation of a great All-American pro football star.

Based on the book, The Blind Side: Evolution Of A Game by Michael Lewis, the film is smartly written and directed by John Lee Hancock ( The Rookie ) and largely avoids the clichés of the sports drama to become a compelling portrait of an unlikely bond between two people from opposite sides of the tracks. Although it does occasionally fall prey to some genre traps (including way too much football and a couple of corny montage sequences) Hancock keeps the story on course and along the way offers up some pungent observations on the breeding and recruitment of college football stars. When the Tuohy’s motivation for taking in Oher is questioned the film really earns its gravitas.

Bullock may have found her Erin Brockovich in Tuohy, commanding the screen with grit and determination in an Oscar-worthy role if ever there was one. Her southern accent is spot-on and Hancock’s script offers her plenty of crowd-pleasing moments all of which she plays with smarts and conviction. McGraw is pleasant but not much more as an almost too-good-to-be-true dad, while Bates is spirited in the tutor role. The kids are sweet and well-played by Lily Collins and Jae Head as SJ, their young son. Aaron recalls a young Forest Whitaker in his role as Oher, the near homeless kid who rises to the top thanks to the concern of a very special woman. It’s a fine debut. Sharon Morris is quite good as an investigator looking into Oher’s choice of colleges.
In addition to Ray McKinnon as a football coach, a number of famous real-life college coaches also turn up to recruit Oher including Lou Holtz and Houston Nutt.

Considering the family nature of the story, the PG-13 rating seems a little harsh.