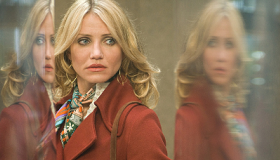 Donnie Darko director Richard Kelly takes a stab at adapting fantasy writer Richard Matheson’s short story Button, Button. What results is the opposite of pressing. Rod Serling could have said everything The Box says in nearly two hours and compress it into one thirty-minute episode of the Twilight Zone —and he’d have made it more compelling. In fact, he may have. With the low-budget Paranormal Activity still going strong and The Fourth Kind also hitting multiplexes, this inchoate thriller is unlikely to earn substantial coin. Sci-fi lovers should find it risible, and those who devalue the genre will have their biases confirmed.

A deep economic recession is an opportune time to release a film that hinges on a married couple’s choice between obtaining much-needed cash and harming an anonymous fellow human being. The Sci-fi elements of such a scenario could be jettisoned with no harm done to the movie’s financial performance. But because The Box has the speculative source material that it does, and since the paranormal is definitely not out of vogue, that wasn’t an option.

A mish-mash of hokum posing as deep thought, The Box considers what transpires when Norma and Arthur Lewis (Cameron Diaz and James Marsden) are told that if they press the button on a device mysteriously delivered to their home two things will happen: someone they don’t know will die and they will receive a million tax-free dollars. The time is 1976. The place: Richmond, Virginia. Arthur is a NASA engineer working on the Viking mission to Mars and Norma teaches literature at the private school their son attends. (On her syllabus, Sartre’s No Exit. ) Years ago, she lost the toes on one foot in a freak X-ray accident and walks with a limp. Now she’s due for another operation. Adding to their financial woes, Arthur’s hopes of joining the astronaut corps are dashed. The courtly man that appears on their doorstep wearing a charcoal grey topcoat and Bromberg poses this proposition on behalf of his unnamed employers. His name is Arlington Steward (Frank Langella) and one-quarter of his face is missing.

Not cogent and barely coherent, the tale writer/director Kelly spins is short on action and special effects. As the slow-burn tension builds, so does our sense of bewilderment. Are we dealing with an alien invasion and/or abduction? A vast government conspiracy? Is it a case of a madman with no access to reconstructive plastic surgery? What’s with all the bloody noses and the zombies lurking outside the Lewis residence, marching through the public library and working as parking valets and waiters at a family wedding? The Galaxy Motel is a locus of intrigue, apparently extraterrestrial, and at the library Arthur gets a glimpse of the beyond after passing through a portal that functions like a burst waterbed.

As for the moral choice the Lewis’ face, it’s strictly kid stuff, mixing the micro and the macro in a confusing manner that never plausibly or imaginatively accounts for the movie’s many dangling threads. Arthur and Norma must make a second decision during the climax—it involves their son, about whom we don’t care a wit by the way. The bogus existentialism on offer relies on references to something called the “altruism coefficient,” as well as to the works of Sartre. As far as I can tell, it all comes down to a classic (read: tired) dynamic in speculative literature: some entity or force much bigger than man (it might even be God) tests the moral fiber of the human race.

Macabre and mysterious in the hokiest of ways, The Box couldn’t be a less life-altering movie about a “life-altering proposition.” The invocation of Arthur C. Clarke’s Third Law— “Any sufficiently advanced technology is indistinguishable from magic”—seems like a bad joke. Not only is the substance a jumble but with the exception of Steward’s digitally-mangled visage, there’s nothing distinguished about the production values. At one point, Steward observes that we humans are wont to put ourselves in boxes—such as the houses we live in, the cars we drive and the caskets we end up in. He neglects to mention movie theaters. That’s one type of box it’s within our power to avoid.