close
The weak and the wicked

The End of Poverty? 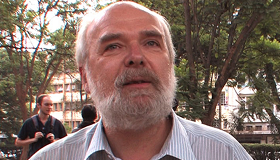 Between the worrisome numbers addressed in the doc The End of Poverty is the silent and nuclear implication that developed countries send what’s known as economic hit men into poorer nations to coerce their rulers into unfavorable foreign policies. If the threatened leaders say ‘no’ to the offers, they’re strong-armed or replaced with puppet politician. This is just a snippet of The End Of Poverty?. Ample helpings of interviews with academics, hard laborers in Brazil and Bolivia and farmers with families from Nairobi to Caracas who witness their land get turned for profits going to foreign territories. The doc should get plenty of play and inspire us to scale back on so-called needs and determine what’s essential.

The message is shouted at full volume: from the early ages to modern day the imperial powers pillaged resources to cause mass poverty. It stings. It starts with the land and resources; conquests from long ago led Europeans to pimp their subordinates in Africa and South America for their abundant goods. Then they took the deed of the land and forced the natives into perpetual debt—ultimately indentured servitude. Director Philippe Diaz’s thesis is that developed nations with millions of poor dying daily from hunger or maltreatment comes back to greed and ignorance, one economist called it military neo-liberalism. That today’s methods are turning to the military to fight for their interests (as in Iraq) is evidence that diplomacy is off the table.

It’s hard to back down from the film’s serious claims. The big question mark in the title asks: Can we prevent poverty? Along a stretch of sugar cane fields in Sao Paolo workers log insane hours to slash and bundle the harvest all to get a small wage that ultimately outfits them with a barely sustaining meal. One hardened cane worker rages, “This world is infested with thieves. That’s why we have killing and unemployment.”

The bull’s-eye is on Capitalism. While Holland sucked Indonesia dry of its textiles and its ceramics, and the British exploited Indian secrets, it’s the U.S. that’s getting the lion share of reproach here. Raw materials are big commodities in the global economy, and there’s an apparatus that’s allegedly keeping the privileged pampered and the poor persecuted. An indigenous Bolivian man named Eduardo Yssa says the arrival of privatization destroyed his culture. “It was stolen from us,” he says, “to make us submit to them and be servants.” A frustrated Tanzanian feels deprived of his livelihood after a rich conglomerate plowed through their vibrant farm to build a dam and insodoing flooded the farmlands and rotted their crops. “We are now subjected to a life of servitude in our own ancestral country.”

Of the slugged statistics shoved in your face throughout the film, the fact that one-percent of the rich own 32-percent of the world’s wealth tops them all. Then there’s John Perkins who went on record admitting he was an economic hit man, confessed he’d failed to deal with Panama’s Omar Torrijos and Ecuador’s Jaime Roldos and then explained that the two leaders were assassinated for refusing to dance with American policies. Former CIA operative Chalmers Johnson substantiates, “It is fact that the CIA were the private army of The President for holding dubious, virtually, invariably, disastrous interventions in other peoples’ countries.”

There’s no blanket to cover the eyes from the devastation that is causing millions of people to go hungry. Many bravely go before the camera in their slum admitting they skip meals. Diaz deserves a nod for getting his boots dirty to source evidence on the ground. Ultimately, the film leaves you winded and taunts everyday problems. The next time somebody cuts in front of you to order his Venti latte, remember the tired hands that provided those beans have problems—and those problems tower over ours any day of the week.