close
Nothing probing to speak of 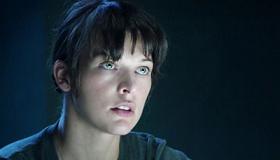 Interspersed throughout The Fourth Kind, a Sci-fi thriller about a Nome, Alaska therapist and her patients' close encounters with extraterrestrials, there are snippets of an interview director Olatunde Osunsanmi purportedly conducted with the "real" Dr. Abigail Tyler. Watching Tyler in these excerpts, it is only too easy to come to the horrific conclusion that an end result of alien abduction is dull and lifeless hair. Unhappily, "dull and lifeless" is also an apt description of this excruciating Sci-fi thriller. Not even the presence of dependably quirky actors Elias Koteas and Will Patton in key supporting roles can inject any life into this flabby exercise. Sci-fi fans, particularly those with a yen for alien stories, might turn out opening weekend, but word of mouth should be brutal, dooming any chance of real box office success.

Star Milla Jovovich opens the drama to announce that what is about to unfold is "true" and that the movie contains actual footage of some of the events. The story, she concludes, is "disturbing." Anyone who believes any of that may be interested in purchasing a bridge that is for sale in Brooklyn—cheap!

Jovovich plays the recently widowed Dr. Tyler who is treating a series of patients for the same sleeping disorder. They all report seeing an owl outside their windows at the same time each night and some think that the owl might be inside their bedrooms staring down at them. All of them have fuzzy recollections and tremendous fear to go along with the insomnia, so Abigail turns to hypnosis to see if that can unlock her patients' memories. What she discovers seems to suggest that ill-mannered, probe-equipped space creatures have targeted citizens of Nome—and may be coming after Abigail and her household.

The entire story is ludicrous, from the aliens allegedly spouting Sumerian and saying things like "I am God" (according to the linguist that Abigail conveniently consults) to video recordings becoming distorted any time there is even a hint of an alien presence. Sheriff August (Patton) announces he’s going to arrest Abigail without ever even hinting what crime he thinks she has committed. Most ridiculous of all is that in one important area of her life, Abigail is clearly delusional and both the sheriff and her therapist, Dr. Ramos (Koteas), know it. Yet, apparently it does not occur to either one of them that maybe someone in her state really ought not to be seeing patients.

The wild improbability of the tale is not what ultimately dooms The Fourth Kind. The preposterous can be entertaining, but Onsunsanmi does not seem to have the slightest idea of how to tell a riveting—or even a slightly interesting—story. Composer Atli Örvarsson’s elegant score suggests building suspense, but that is undercut by the film's flaccid writing and flabby pacing. The press materials all insist that the tale, written by Onsunsanmi from a story he concocted with Terry Robbins, is based on real events. Well, considering the complete lack of drama, that's an easy out. Who knew alien abduction could be such a bore?