close
What it takes is more than we can imagine. 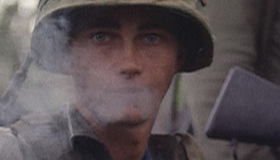 Five generations of battle-tried (but unbroken) men who wore the uniform as valiant patriots and suffered a painful deliverance from innocence are front and center in The Good Soldier. Their wars differ but their tales are eerily identical. Their material is arresting, with troves of detailed memories pouring out for the first time. These veterans shed their ranks, medals and names and what comes through are their fragile spirits; some glimmer of the young man before he became a trained killing machine. The Veteran’s Day release date should fill sentimental seats but won’t witness a barrage at the box office.

Doc makers Lexy Lovell and Michael Uys devised a way to get close to these brothers of wars. World War II vet Private Edward Wood replays the moment his head turned into a shrapnel mosaic. Will Williams was a Staff Sergeant in Vietnam; he retreats back to blood battles as if he were being ambushed right then and there—carrying a man through a monsoon while the man’s brains slip out of his head. Chief Warrant Officer Perry Parks also fought in Vietnam and refers to air strikes on green jungle villages as “hosing them down” because of the massive amount of ammo shelled-out. Captain Michael McPhearson served in the first Gulf War and is now a peace fighter doubly troubled because his son just shipped off to Iraq. And most startlingly, as a result of what Staff Sergeant Jimmy Massey’s describes as spiritual deflation and agonizing regret, he now calls himself a war criminal.

Many soldiers come back from tours too traumatized to talk. They reserve the right to be silent. Given the spilling of guts in this film it’s understood why soldiers often choose to go to the grave with their war chest. Meanwhile, it’s downright uncanny how when each of these vets talk about the past he goes into the same trance. The eyes gaze to the side or cast downward and the details simply go and go: the shape of the clouds, the smell of the blood in the air. If the film was broadcast over the radio you’d think they were all comrades talking about the same war, the same despair. War is war is war: this is the underlying specimen writhing in the brush.

Staff Sergeant Jimmy Massey channels the warrior ethos and admits that the killer instinct consumed him. “There is no other feeling in the world when you’re hunting another human being. The drawback to that is the fact you want to do it again because you enjoy it.” Taking a life steals a person’s morals and logic. It’s all about the next mission, the next combat role. Southern-born and persecuted Staff Sergeant Williams also copped to being “wired-up” with a hungry trigger finger. “It went beyond the call of duty. It had turned into something else,” he blasts. “I feel like I had become an animal. I could kill without remorse.”

Slogans like “Part-time duty. Full-time hero” will stick to fetch future recruits who’ll carry more than their rifle to the job, but lug heavy baggage home. That’s if they are fortunate enough to make it home at all.