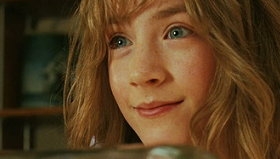 Peter Jackson returns to the engrossing and poetic imagery that earned him his name more than a decade ago. Invoking the symbolic and the affective as he did with Heavenly Creatures, Jackson creates visuals that sweep and morph together for this melodrama-cum-detective story about a 14 year old girl murdered in suburban Pennsylvania, 1973. The Oprah Book Club assisted the novel by Alice Sebold in amassing record sales, and the popularity of this story along with an appropriately weighty and dramatic adaptation will help this film be both a short list item for the Oscars and a big draw at the box office this holiday season.

Saoirse Ronan ( Atonement ) plays Susie Salmon, the character around which this film’s world and its other world revolve. Susie’s part of an ideal family, coming of age in a time prior to photos of missing kids on milk cartons. She’s got her heart set on a handsome senior (Reece Ritchie) but it’s her neighbor, Mr. Harvey (Stanley Tucci), who’s got the tightest watch on her. When she goes missing her parents go through the varying stages of grief, and she goes through the varying landscapes of a glorious purgatory that both mimics the minutia of her past reality and echoes the transitions experienced by her healing family.

The Lovely Bones gives more significance to the artful but somewhat airless metaphysic suggested by What Dreams May Come in 1998. Here, we still play on the notion that this life and the life after are bound through a process of creation that can be seen in art or, in this case, in hobby craft. Susie’s killer makes miniature houses; her brother, Buckley (Christian Thomas Ashdale), sees her in his sleep and draws her reality into his crayon horizons; her father sees her in the reflections of candles perched on his ships-in-bottles. These realities factor into Susie’s poetic landscape in epic scale: the cornfields where she was murdered melt into swamps and then oceans, all golden, flowing and vast. The lighthouse she has on her charm bracelet, echoed in a drawing found in the cavern where she was killed, becomes her touchstone—an icon to suggest the carrying of light from the world she knew to the one she slowly uncovers as she negotiates her transition from life into death. These icons ritually return us to the notion of the macro and the micro: in every universe, a snow flake, in every snowflake, a universe. Susie, whose new world is made of a repeated immersion in moments, is fascinated by photography and its capacity to capture an instant forever—her afterlife mimics this immersion.

Jackson is inscribing himself into history  again. The director’s sweet, little cameo (he’s playing with a brownie camera in a camera shop), pushes further the notion that a film’s life as a series of moments endures well past projection. If it’s well made, it endures well past the lives of the makers. This one threatens to outdo the popularity of its source material—the winds are that strong and the craft that finely tuned.

Make sure to check out our interview with Peter Jackson here as well as Saoirse Ronan here .