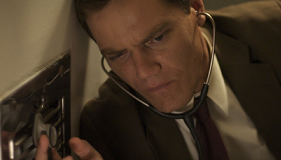 Michael Shannon adds another stunning performance to his resume with this small-scale neo-noir by writer/director Noah Buschel. Private Investigator John Rosow (Shannon) is insistently hired for a highly paid contract to follow a man on a train from Chicago to LA—it’s clear from the start he’s not in control and never alone. Much like the noirs of the 1940s and ‘50s, Missing Person struggles under the weight of a trauma, but Buschel has replaced WWII with 9-11 and included a great number of arthouse tendencies and poetic motifs to carry us through. So while the film has a noir aesthetic and certain similar sensibilities it’s not a film that lives on the gritty ground level—the city isn’t menacing—it’s each character’s interior landscape we have to fear. Here, shadows come from within. Numbers shouldn’t be too large as distributor Strand isn’t putting the film into that many theaters, but if given half a chance and a decent marketing push, this one could do well by arthouse standards. It is, after all, a very well made update to an ever-vital mode of storytelling, and the acting is fabulous across the board.

Detective John Rosow (Shannon) left New York for Chicago shortly after 9-11 and took up a post as a detective for hire. A murky 5am call forces him into a job following a man on a train from Chicago to Los Angeles, all this for too much money and too little information. Aboard the train he finds the man, Harold Fullmer (Frank Woods), and finds he’s chaperoning a little boy (a major liability). Shortly thereafter, he finds he’s being chaperoned by the FBI. Rosow is ill at ease and has taken to dousing his discomforts with gin. Shannon’s detective drinks like many use rescue drugs and the gin opens his vibrant interior world to us. This is where we experience his visions of a horrible past and a beautifully iconic fantasy life—all-revolving around a missing woman. Once he reaches Los Angeles, the representative for his contact from Chicago, Charley (Amy Ryan), begins to leak information. Fullmer has been missing—or on the run—since 9-11. Matching a horror story of his own, Rosow disregards Fullmer’s pleas. Meanwhile, Fullmer has supposedly redeemed himself in his own eyes by carrying out humanitarian efforts in his hiatus from his old identity. Delivering the man, or not delivering him, is not singly something Rosow does, but something he does for himself, which is where the poetics comes in.

Everyone in the film is a missing person somehow, which means they all have a kind of cosmic interchangeability: Charley is a woman without a place; Rosow’s possibly untrustworthy ex-partner is a cop whose lost his (ethical) footing; Rosow, our hero, is half a man, plagued by the memory of a woman he lost. For most of the film we can believe that the missing person is Rosow’s dream woman, but she’s just the gateway. The film recurrently confuses the angelic and the earthly, which serves as a reminder of how easily we define these roles in our stories and how difficult they are to differentiate in the worlds we inhabit. Consistently, the characters with the apparently simplest motivation are the least lit (Fulmer’s wife) and those with the most conflicted motivations (a drug runner who manages an orphanage, for example) are the easiest to see. It’s clever that Buschel makes his authority plain throughout the film—undermining directorial authority is perfectly sheik and likely always will be—but the degree of security Buschel demonstrates with this film shows a steady hand and a universe of promise. Who knows: maybe next time around he’ll make something a little less indebted to a 60 year old aesthetic. Lord knows he found new twists on this old flavoring.