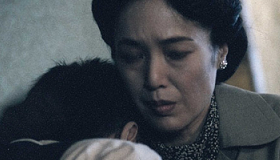 Alexander Sokurov’s uniquely Russian brand of minimalist poetry has always been an acquired taste, so it’s not unexpected that his 2005 Solntse, or The Sun —just now getting its U.S. release—boasts some peculiar stylistic and narrative choices. An intimate if meandering look at the final months of Japanese Emperor Hirohito’s reign in late 1945, The Sun appears to have been prompted as much by the success of Oliver Hirschbiegel’s Oscar-nominated 2004 Downfall —which preceded it by just one conspicuous year—as by a desire to complete a trilogy on World War II dictators (Hitler in 1999’s Moloch and Stalin in 2001’s Telets ). Unfortunately, the director’s impressionistic approach never quite gets its footing, mostly just biding time with a figure who, by any relevant standard, simply isn’t that interesting. Sokurov devotees will admire the film, regardless, guaranteeing that miniscule arthouse returns don’t become too much of an embarrassment.

Known only in the most obscure cinephilic circles until 2002’s famous “one-take” gimmick, Russian Ark, put him on a more mainstream map, Sokurov has historically made a career out of meditative character pieces, narratively formless pictures predicated on the notion that personal minutiae juxtaposed against relevant geopolitical, historical or socio-political backdrops can elevate the mundane to the level of the dramatic. It’s always been a dodgy proposition, and even Sokurov’s best films—like the potent antiwar statement of 2007’s Aleksandra —achieve their best moments amid copious lulls. The overriding problem in The Sun, however, is the central figure: Emperor Shouwa-Tennou Hirohito (Issei Ogata). Unlike his less reclusive, more charismatic World War II counterparts, Hirohito was more figurehead than head of state, a largely impotent symbol used by the country’s military elite to maintain power under the strange, arcane belief that the Emperor was a living god, a literal descendent of the Sun Goddess. That belief was ultimately shattered by the two events around which Sokurov builds his film—the Emperor’s shocking radio broadcast, which marked the first time his voice had been heard publicly, on the day of Japan’s surrender in August of 1945, and the subsequent declaration that he was nothing but a mere man. The rest of the film, reportedly the first movie to depict the emperor in any kind of personal way (and it’s easy to see why), consists of Hirohito behaving like a sheltered child—composing poetry, fawning over photo albums, tinkering in his personal science lab and just generally appearing out of touch with outside reality. Strange physical ticks like an affected manner of speech and chronic lip tremors merely add to the overall sense of tedium.

When the film finally comes to life, it’s almost too little too late—Hirohito’s famous meeting with General Douglas MacArthur (Robert Dawson) is a haunting encounter, magnificently photographed (by Sokurov himself) as a kind of existential ballet, so as to emphasize the chasm that separates the two—culturally and politically—while underlining the savage irony of the moment itself. It’s a resonant scene—one of the best Sokurov has ever staged—yet undeniably trapped in a movie otherwise comprised of substantially lesser moments. A more apt analogy than Sokurov’s previous films or Downfall would be Robert Altman’s 1984 Secret Honor, which attempted a similar probing of Richard Nixon’s solitary psyche. Like that film, The Sun feels ambitiously under-realized, a noble failure more impressive than enjoyable.

Apart from the aforementioned idiosyncrasies, Ogata’s performance is quite impressive, as is Dawson’s unconventionally dense interpretation of MacArthur. Dazzling production design by Yelena Zhukova, excellent scoring by producer Andrey Sigle and chilling digital effects work in a nightmarish dream sequence all help bolster the pedigree.