The Thorn in the Heart/ L'épine dans le coeur 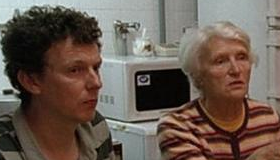 Taking a break in the narrative flow between 2008's Be Kind Rewind and next summer's superhero extravaganza The Green Lantern, Michel Gondry returns to the big screen with a documentary about his Aunt Suzette, a schoolteacher for more than 30 years in the Cevennes region of France. The woman and her son Jean-Yves are an engaging pair, but the film, which made its United States premiere at the San Francisco Film Society's French Cinema Now festival, is so personal that it is unlikely to attract much of an audience beyond the Gondry clan and is likely to disappoint fans of Gondry's eccentric fictions. Box office returns will be meager.

Just how intimate a Gondry family story this will be is evident from the doc's opening scene, as a gaggle of Gondrys, including Michel, Jean-Yves and Michel's teenage son, Paul, sit around Suzette's table listening to her spin a tale about her late husband. The memory makes her fairly giddy with laughter and it's the type of laughter that’s infectious to her family gathered around her and to the movie audience that eavesdrops on this private moment. But Gondry quickly switches gears to get to the meat of the film, which alternates between a kind of history of the educational institutions in this rural, conservative region of France, as he and Suzette visit every school she taught at until her retirement in 1986, and a more personal history of the troubled relationship between Suzette and Jean-Yves. Michel is a dozen or more years younger than his cousin, and while it is evident that he wanted to pay homage to a beloved aunt, one does have to wonder how much of his motivation in making the doc was to find out the truth behind family gossip for himself.

The Thorn in the Heart is not completely lacking in Gondry's typical whimsy. In particular, transitions that makes use of Jean-Yves' model train set are a delight. It is a straightforward story, punctuated by insipid English-language pop songs on the soundtrack (by far the film's weakest element). That it takes place in a section of France rarely seen in narrative drama adds a bit of a travelogue flavor but for the most part it is a film dominated by its personalities, Suzette, Jean-Yves and to a lesser extent, Michel. They are all appealing and the movie rarely flags, but it is hard to get past the notion that what is on screen is nothing more than an artfully made home movie and that the Gondry family saga is no more interesting than that of the average loving, if somewhat dysfunctional family.