close
You'd have to do much worse to end this crush 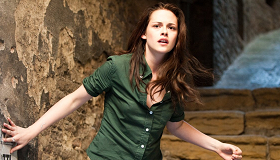 Talk to a Twilight fan (or Twihard or Twimom or Twitard, if you're nasty) and you'll hear concessions: Stephenie Meyer’s books are poorly written, Twilight is too melodramatically directed. Even Edward, they'll admit, is way emo and Bella sullen with entitlement. And that's from the devoted. New Moon isn't good enough to seduce new fans, but it's not bad enough to break off relentless infatuations. And though it'll make a mint, the big test is if fans will leave clamoring for the next two movies (the third of which is in production and the fourth plagued by concerns that it's unfilmable).

Enjoying all of New Moon 's 130-minute running time (as I did, well enough) takes the ability to swoon and snort simultaneously—say, when a fantasy Bella runs through the woods in gray chiffon, or Edward recites the closing lines of Romeo and Juliet by heart. (He has been in high school for 80 years). We pick up at the start of Bella's (Kristen Stewart) senior year where she's devastated to turn the ripe old age of 18. Her vampire love (Robert Pattinson) stopped aging at 17 and Jacob (Taylor Lautner), the young Quileute Indian waiting for Edward to screw up with the irresistibly glum beauty, is just sweet 16. (And if you think Melissa Rosenberg's script is too weepy to make a cougar joke, you'd be wrong.)

When Edward breaks up with Bella and skips town, throwing in a few hurtful kicks so she won't follow, New Moon becomes a melodrama about a broken heart that gradually and sweetly mends. Edward and Jacob (or for fans, Team Edward and Team Jacob) represent the poles of immediate love with a stranger or patient love with a friend. As a sensible girl, I'd go Team Jacob, and not just because Jacob's wolf pack requires going topless. (If you're wondering how they keep their pants post-transformation, that's a secret for the book.) But Bella's again fallen for a reluctant killer—the werewolves' temper has already gotten one of their girlfriends maimed—which means even more shots of screaming and crying and running in the rain. But though Bella's dad (Billy Burke) advises her to “love who is good for you,” she still carries a torch for Edward—just the sight of his face sucks the air from her body. (Ironic, given he once crooned to her, “Bella, you give me everything just by breathing.”) They share the ultimate of teenager status symbols: a great love no one understands. In the ’50s that got sweethearts run over by trains. Here they battle carnivorous vampires. Same difference.

In interviews, you get the sense that everyone involved in the franchise from director Chris Weitz to his stars would rather being doing something else. That translates on the screen; in the way the camera awkwardly steps in and back during another declaration of love, the way that Pattinson clenches his jaw when Edward has to say something ridiculous, the way you can feel Stewart trying her darnedest not to bite her lips and stroke her hair (two tics teased by everyone from the blogosphere to Taylor Swift on SNL ). The ultimate question is: if fans reluctantly love the books and reluctantly love the films, what's the source of their great love no one understands? It's part-Pattinson, but not wholly. After all, few bothered to catch Little Ashes , his catastrophic turn as Salvador Dali. The best I can figure is that fans are in love with themselves, with this fun and festive club they've formed, the goofy romance of Twilight mania (after all, post-Springsteen, mass culture has sorely lacked messiahs.) How bad does the movie have to be to make them stay away? Much worse than this. Carry on, sweet sisters, carry on.

Make sure to check out our interviews with Taylor Lautner here and Chris Weitz here .