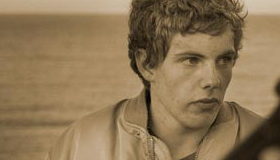 Turning Green is one of many in a market flooded with coming of age stories by up-and-coming directors looking to recapture the glory days of minimal responsibility and maximum possibility, but writer/directors Michael Aimette and John G. Hoffman still manage to squeeze some charm out of the overwhelmingly familiar. With the help of first-time performer Donal Gallery, this mix of gangster drama and quirky comedy boasts a modest charm that should appeal to young men around same age as the 16 year old lead character, despite a lack of focus and familiar twists.

James Powers (Gallery) hates Ireland. He spends his days dreaming of America and all the ways he and his younger brother Pete (Killian Morgan) can make some money and leave it all behind. Ultimately, James's solution is Bob the Bookie (Alessandro Nivola), who sends James around to pick up the cash from his betting customers and otherwise report back, so that Bob might send Bob the Breaker (Timothy Hutton) to rough them up should they fail to pay on time. One of the Bookie's customers is James' friend Tom (Colm Meaney), who doesn't have the dough the day James shows up, and James lies on Tom's behalf. When Bob discovers the lie, he demands that Tom or James pay the money back in three weeks, forcing James to hatch a plan.

As James, Gallery is funny and believable without trying too hard to be charming, and he plays well off of everyone in the movie, especially Morgan as the younger brother and Meaney as the grizzled, pseudo-father figure. Meaney's scenes are all-too-brief, probably totaling less than 15 minutes of the film, and it's a shame he doesn't get more to do. The flipside of this is Hutton, who is fine as Bob the Breaker but just not all that important in the grand scheme of the movie; whoever got him top billing deserves a raise.

A sense of fear accompanies the third act, with the possibility that the film will kill all of its goodwill with an overly dark ending seeming more and more likely. Luckily, while the conclusion Aimette and Hoffman have devised is not as good as the film's best moments, it doesn't ruin them retroactively. Taking Green is a pleasant little "rainy day" movie with some multicultural appeal, worth a look for anyone disinterested in what's playing at the local multiplex.