close
Has the makings of an indie hit 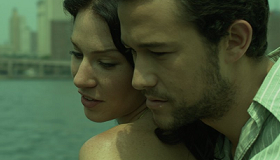 The random nature of fate gets a workout in Scott McGehee and David Siegel's Uncertainty. The filmmakers behind Suture, The Deep End and Bee Season return with a drama in which a young couple's flip of a coin leads to very different destinies. The conceit is not entirely successful, but with Joseph Gordon-Levitt and Lynn Collins playing the young couple and a tale that offers drama lovers plenty to chew on, careful positioning could well develop Uncertainty into that increasingly elusive rarity, the indie hit.

On a hot 4th of July morning, Bobby Thompson (Gordon-Levitt) and Kate Montero (Collins) are strolling along the Brooklyn Bridge, trying to decide their future. They are very much in love but the relationship is at a crossroads. Bobby suggests flipping a coin. In the universe that McGehee and Siegel establish, what hinges on that toss is not just a romantic reckoning, but altered destiny.

In cross-cut fashion, the drama explores two separate fates for the couple. In one, they drive to Kate's family's house in Brooklyn for an Independence Day barbecue. In the other, they declare their own independence by deciding to skip the family celebration and spend the day in Manhattan instead. That situation turns explosive when they discover a lost Treo in the back of the cab and Bobby tries to do the right thing by getting the PDA back to its owner. Multiple bad guys want that Treo, and before they quite realize what is happening, Bobby and Kate are on the run.

Of the two stories, the first is certainly banal, at least on the surface. Kate has a difficult relationship with her mother, Sylvia (Assumpta Serna), who does not approve of her eldest daughter's sometimes-hardscrabble dancer's life. Now Sylvia's angry because younger daughter, Sophie (Olivia Thirlby), has announced that she intends to follow her sister's lead into the arts by becoming an actress. Kate already has a lot on her mind, and now she finds herself being pulled back into family trauma.

The crime story has more action, suspense, and melodrama. It is more exciting, but Tommy and Kate do not just appear to be living an alternative fate, they also seem like completely different people. The Brooklyn Tommy and Kate may enjoy a more mundane 4th of July, but those characters are so much warmer. This is a couple that rescues a stray dog they find wandering too close to a busy street and are big-hearted enough to simply adopt it. In contrast, the Tommy and Kate of the crime saga are colder and not above trying to manipulate a dangerous situation to their own ends—and not quite smart enough to realize when they are in over their heads.

Director of photography Rain Li, a protégé of the great Hong Kong cinematographer Christopher Doyle, and her crew mostly employ handheld cameras, a strategy that lends the film an energetic, sometimes vérité feel, while capturing the vibrancy and sweltering heat of a New York summers day. McGehee and Siegel chose their locations wisely, especially in Manhattan's Chinatown where much of the action takes place. A rooftop chase highlights these scenes in a thrilling scene that would not be out of place in some far grittier ’70s era policier.

Gordon-Levitt adds another memorable character to his growing gallery of exquisite performances and Collins is a perfect match. If the stories are not quite equal in terms of quality, they are at least always fascinating, a certainty in Uncertainty 's favor. After the disappointment of Bee Season, even with its flaws, this represents a welcome return to form for McGehee and Siegel, gorgeously shot, well directed, and idiosyncratic.