close
Does this qualify as confused feminism? 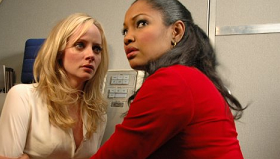 It’s a question that has plagued mankind for seconds: what would happen if Pedro Almodóvar and Quentin Tarantino lost 150 combined IQ points and made a low-budget, labor of lust? If the answer is Women in Trouble, we’re sorry we asked. Writer Sebastian Gutierrez probably thinks he’s deconstructing feminine stereotypes in presenting a day in the life of a group of intersecting women. But what he’s really doing is creating a mess of a movie with no clear purpose other than to find unique ways of getting beautiful women to strip down to their undies. This alone might lure frat boys and fetishists into theaters, but that’s too thin an audience to result in any decent box office or home video coin.

Feminine form (their bodies) and feminine function (their purpose in the stories told by the cinema) are definitely ripe for tweaking, just like any movie concept, construct or genre. But Gutierrez is trying to bluff his way into significance. Or at least create a film that moves so fast it’s over before you realize it’s added up to nothing. In the very first scene, we’re introduced to the woman as Madonna/Whore, but this particular Madonna/Whore is starring in a porno. Elektra Luxx (Carla Gugino) is an adult actress who receives a phone call while shooting a scene, strips off her nun’s costume and learns she’s pregnant. The vignettes spin off from there, as Elektra introduces us to Holly Rocket (Adrianne Palicki), a fellow adult star with an odd aversion to lesbian sex acts. Holly, in turn, tries to earn some extra cash by teaming with Bambi (Emmanuelle Chriqui) to service a Hollywood producer.

Gutierrez began as a writer of genre fare like Snakes on a Plane and Gothika. The former was a stinker (OK, both were stinkers) that was still self-aware enough to embrace the b-movie world from whence it came. Here, the director shows little knowledge of what he’s sending up, nor is he sure what he wants to say about the sexualized role of women in film, especially genre film. That’s not to say this unwieldy effort doesn’t get in some good jabs—like, for instance, the 13 year old girl (Gutierrez’s daughter Isabella) who alerts her pretty blonde therapist (Marley Shelton) her husband is unfaithful. Ironically, the film’s best part is the story that most involves a man, specifically James Brolin as an English rock star trying to convince a flight attendant to join the Mile High Club.

The outrageous early goings-on eventually give way to tear-filled, acting-class monologues that might have seemed liberating due to their naughty subject matter. But by then, the film has already reduced itself to an empty exercise in campy, color-bathed titillation, as a gaggle of women are defined by their sexual drives and abilities without comment from the filmmaker. Had Gutierrez been a craftier or cleverer writer, he’d make something out of the lesbian who prays for divine guidance before giving a masseuse oral sex, other than just putting it out there and hoping someone finds meaning in it.

As little as this works, it would work even less without the all-in performances of the cast. Take a quick look at Gugino’s credits and you’ll be surprised at the number of high-profile films she’s appeared in. However she’s yet to become a recognizable name. One hopes she’s only reduced to playing a porn actress (whose fans buy replicas of her vagina) because she happens to be dating Gutierrez. The rest of the female cast, including Connie Britton as a neurotic mother trapped in a sweltering elevator with Elektra, give uninhibited, no-one-will-see-this-so-who-cares performances. The most surprising is Palicki, as the worst-case scenario version of the Suzanne Somers character from the old sitcom Three’s Company. She even provides the film’s biggest (read: only) genuine laugh, which comes during an end-credit interlude with a celebrity interviewer played by Joseph Gordon-Levitt. So full blame goes to Gutierrez. You can forgive the problems inherent to a low budget and a 12-day shooting schedule, but that only puts the onus on him to craft a terrific script. And terrific scripts, especially when the director is writing it and theatrical distribution is a faraway dream, are technically free. Too bad he’s taken on more than he realizes. And any director who uses smash cut, blindingly loud montages must know he’s putting the audience to sleep. And that, really, is the problem with Women in Trouble. Never has glistening female skin, pink panties and long drags on imaginary cigarettes, resulted in a more unmemorable film. And that, pimps and porn stars, is the biggest sin of all.