close
Cheeky toys for grown up girls and boys 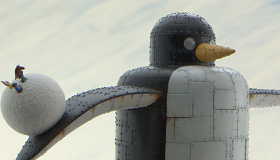 A cowboy, an Indian, and a horse throw a birthday party. This could be the start of a corny joke, instead it is the set up for the anarchic wackiness of A Town Called Panic. A big-screen spin off of a popular Belgian animated series, this goofy, hilarious stop-motion fable recently charmed an audience at the San Francisco International Animation Festival in a run-up to its December 16 U.S. release. While clearly inspired by fondly remembered childhood playthings, the movie is more for grownups than kids, although precocious youngsters may delight in humor reminiscent of Monty Python's Flying Circus and Wallace & Gromit. Distributed by specialty house Zeitgeist Films, the film's theatrical fortunes will be modest in limited release, although good word of mouth might pay unexpected dividends at the box office.

It is not the party to celebrate Horse's (co-writer/co-director Vincent Patar) birthday that sets the story in motion, but Cowboy (Patar's partner Stéphane Aubier) and Indian's (Bruce Ellison) actions when they realize they have forgotten the big day. Needing a gift for their pal and roommate, they decide to build a barbecue and accidentally order the wrong number of bricks. What they do with all the extra bricks throws their tiny rural village into a real panic when all the activity attracts larcenous sea monsters. The intrepid trio's attempts to make things right leads them on a grand adventure and causes Horse to miss piano lessons to the disappointment of his teacher, the lovely mare Madame Longree (Jeanne Balibar). Many waffles are eaten (it is Belgium, after all).

The handmade plasticine figures look like a child's toys, right down to the bases that prop the characters up. A giant, snowball-wielding penguin resembles a sno-cone machine recruited into service, while the disproportionate size of the waffles leave the impression that all of this is taking place in the imagination of children over the breakfast table; so too does the plot, which soars on the surreal logic of an exhilarating flight of fancy. Adding to the sense of kids at play are the exaggerated tone of the voices, another engaging element that makes one happy that Zeitgeist picked this up for American release and not one of the major studios who likely would have hired major stars to dub the movie into English. George Clooney is an absolute joy in Fantastic Mr. Fox, but his kind of charisma is completely unnecessary in A Town Called Panic where the real stars are the power of imagination and a keen, playful wit.