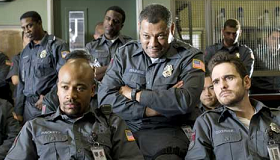 "There are no bad guys here, only good guys," declares armored bank guard Mike Cochrone (Matt Dillon) in Nimród Antal's action thriller, Armored, just before he and a tight-knit group of fellow guards embark on a caper to rob themselves. Mike might even believe it when he says it, but when the job starts to go south he and the others discover just how fine the line is between good and evil. Sony ScreenGems has so little faith in the movie that they’re sneaking it into theaters without first screening it for critics. That seems odd given it boasts a cast that includes, in addition to Dillon, Laurence Fishburne, Jean Reno and Fred Ward, and the fact that while it is completely predictable Armored is also efficient and suspenseful. It’s no blockbuster, but with a built-in audience of genre buffs and the stars' fans, it ought to pay the studio that has dissed it respectable dividends.

Inspired by a two-decade old, unsolved armored car heist that they are convinced was an inside job, Cochrane and his pals Baines (Fishburne), Quinn (Reno), Dobbs (Skeet Ulrich) and Palmer (Amaury Nolasco) have concocted what they regard as a foolproof scheme to get away scot free with millions. It is a plan they have obviously been thinking about for a long time, but it is also evident that they haven’t considered every possibility. For example, none of them have considered what might happen if Mike's godson, Ty Hackett (Columbus Short), the reluctant sixth man on their two-truck crew, should have a sudden attack of conscience.

In a way, this is kind of a low-rent Die Hard without the big stunts or the humor, as Ty faces off against his former friends. An Iraq war vet, he has certain advantages: he's smarter than they are, more disciplined, better trained and craftier. However, for much of the movie, he is also trapped in the back of an armored car while the others hammer away outside trying to get to him and the money. It is to Antal's credit that those scenes are tense and not completely claustrophobic.

Where the movie falters is at the level of James V. Simpson's screenplay. The actors are uniformly fine, but this is a thoroughbred cast stuck playing stereotypes, not real characters, and acting out a plot that is too transparent. A pure popcorn movie, Armored is entertaining, but a more carefully worked out script might have delivered a superior thriller. This is an undemanding movie that might have been much more.