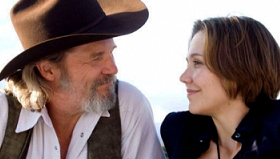 When Bad Blake (Bridges) bothers to lay down the whiskey and cigarettes, it’s only to pick up a guitar. A hard-drinking, chain-smoking, broken down has-been, Blake would almost be a country music cliché if his predicament weren’t so tragically common. At 57, he’s long past his prime, barely scratching out a living playing backwater honkytonks, bowling alleys and whatever remote gig his agent can squeeze from the handful of fans who still remember him. He hasn’t written a song in years and doesn’t plan on ever writing again. Functional when performing—barely—Blake lives his life one day and one song at a time, all his worldly possessions packed into the beat-up old Suburban that gets him from gig to gig.

If Blake has anything akin to a mantra, it seems to be “live for the moment;” he expects little from the future and never dwells too much on the past. An otherwise routine newspaper interview with an attractive young reporter named Jean Craddock (Maggie Gyllenhaal), however, sets in motion events that will bring both past and future into a new focus—if only Blake can once and for all put his demons to rest.

In a career that boasts no shortage of remarkable performances, Bridges’ Blake is a standout. Fearlessly shedding his good looks and sturdy physique to adopt the broken-down, decimated demeanor of an alcoholic drifter, Bridges slips into the part as effortlessly as a cowboy sliding on a pair of relaxed-fit denims, the most evocative such turn since Robert Duvall (coincidentally, one of the film’s co-stars and producers) won his Oscar for Tender Mercies in 1983. At times, Bridges seems to be alternately channeling the likes of Hank Williams Jr., Waylon Jennings and Kris Kristofferson, but never to the extent that Blake vanishes into their shadows. At the flip of a switch he can be a miserable crank or a charming, Southern gentleman—a tragic, larger-than-life talent consumed by all-too-common, earthbound addictions and frailties.

As always, it’s the crossroads that define the journey, in this case the promise of an unexpected romance and hopeful future with Jean and the chance at a resurrected career courtesy of country superstar Tommy Sweet (Colin Farrell), one of Blake’s former backup men. Both paths force a softening of his crusty exterior—Sweet has always been a painful reminder of Blake’s failures, and it takes an ample portion of humble pie to even consider the gesture. Jean, on the other hand, demands more than a casual commitment—her 4 year old son needs a role model and her life needs stability. Jean and Tommy aren’t necessarily at odds in their expectations of Blake—if anything they’re on the same side, offering him the most solid footing for a normal life he’s ever had. But for a man as deeply troubled as Blake, nothing—normal or otherwise—comes easily.

Next to Bridges, the most significant revelation here is writer/producer/director Cooper. Previously known as a modest character actor in such films as Gods and Generals and Robert Duvall’s acclaimed Broken Trail miniseries, Cooper emerges here as a filmmaker of exceptional talent. His adaptation of Thomas Cobb’s novel is as elegant and nuanced as any in recent memory, and his staging of an already talented cast is bracingly naturalistic. Technical contributions are uniformly superlative: Barry Markowitz’ poetic, pastoral photography of the American southwest; John Axelrad’s temperate, deliberate editing; impeccable art direction from production designer Waldemar Kalinowski and pitch perfect music from no less than T-Bone Burnett—also one of the film’s producers—whose exceptional songs, mostly co-written with Ryan Bingham, could just as easily round out the Oscar Song category all by themselves. And yes, Bridges and Colin Farrell do sing their own songs—all beautifully recorded live for the camera, yet another feather in Cooper’s cap.

How then, could a film of such honesty, such resonance, such elegance have been on the precipice of straight-to-video obscurity? The answer likely has as much to do with the lingering social and political divisions in American society as with the epidemic incompetence and cowardice of studio executives. Originally financed by Country Music Television for release by Paramount Pictures, Crazy Heart likely found itself a victim of a red state/blue state disconnect within the Viacom empire. That’s hardly any excuse—if anything executives at Paramount should have been sufficiently connected to their own emotions to appreciate the film’s crossover appeal. But emotions increasingly have little to no role in studio decision making, a loss for both artists and audiences that will eventually—hopefully—translate into a begrudging reckoning on the part of the corporations whose art-hostile corporate cultures have so poisoned the once-flourishing filmmaking culture of Hollywood itself. If, as is likely, Bridges takes home an Oscar next February, he’ll almost certainly follow in the heels of his Slumdog predecessors, thanking Fox Searchlight and ICM agent Jeff Berg for their valiant efforts in getting the film released—while politely declining any denigration, or even mention, of Paramount Pictures. But the message will be clear, and if they have any soul or sense of honor, those at Paramount who first suggested pulling the film from theatrical release will do us all a grand favor and tender their resignations.