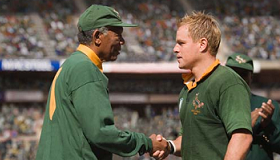 Another awards season, another attempt by Clint Eastwood to straddle the divide between prestige and populism. He succeeds insofar as mainstream sensibilities carry the day. Invictus is a salubrious amalgam of history and sports suitable for family viewing. But its only serious kudos potential lies with Morgan Freeman’s capable turn as Nelson Mandela, who, along with the white Captain of South Africa’s rugby team, inspired a radically re-formed nation during the 1995 Rugby World Cup. Going so far afield geographically, and observing an unfamiliar game, may limit the domestic take of Invictus without necessarily boosting foreign receipts.

If Invictus concerned soccer (or baseball or American football), as opposed to rugby, its ultimate haul would be bigger. Still, you’ve got to hand it to the tireless septuagenarian; Eastwood latches on to good stories no matter where they take him. A distinction between soccer and rugby is crucial to the scenario, which is based on John Carlin’s book, Playing the Enemy: Nelson Mandela and the Game that Made a Nation. Soccer, which the majority black population favored, is described as a “gentleman’s game played by hooligans” and rugby, beloved by white South Africans, as “a hooligan’s game played by gentlemen.”

At the time of Mandela’s election to the presidency in 1994, blacks loathed the national rugby team, the Springboks, viewing them as a representative of the recently abolished apartheid. We watch as Mandela champions the squad, though it has only one black player, making it a central part of his effort to build a “Rainbow Nation” and foster reconciliation. He stops the National Sports Council from dismantling the Springboks and jettisoning its despised colors, green and gold. Then, overriding the skepticism of his aides as well as popular opinion, he enlists its Afrikaner on-field leader, Francois Pienaar (Matt Damon), in the cause of building a peaceful multi-racial state. Along with his charisma, the key to Mandela’s recruitment of Pienaar is a Victorian poem entitled “Invictus,” which sustained the President during his 27-year incarceration on Robben Island.

Inevitably, Invictus constitutes a very orderly scrum. Eastwood and screenwriter Anthony Peckham don’t try to dissect apartheid, the sport of rugby or any individual. The movie operates on an abstract and symbolic level, which makes sense given that success on any amateur playing field is largely metaphorical and that no modern political figure has comprehended the power of symbols—songs, colors, pictures—more fully or used them more wisely than Mandela. He is depicted as a font of avuncular aphorisms, a Confucian statesman overflowing with realist political insights, beautifully expressed. His psyche and personal story are treated gingerly, perhaps to underscore his conviction that the past, including his own suffering, needs to be transcended for the sake of a better collective future.

A downside to this approach, for the texture of movie, is that apartheid exists only on a conceptual level and isn’t made especially particular, distinct, or palpable. The sting is implied, but never felt by the viewer. Moreover, while the violent and manly sport of rugby is played without pads, Eastwood and company aren’t afraid to pad the movie. With its message front-loaded, Invictus builds toward the World Cup final against New Zealand’s team, the All Blacks. During this Miracle in Johannesburg, we’re subjected to the pedestrian use of slo-mo plus countless conventional cutaways to various apparently post-racial groups of citizens watching the match. Hence, the last reel feels elongated and redundant. The black lad listening to the championship on the radio with white cops; Pienaar’s parents watching from the stands with their black housekeeper and Mandela’s own security team—half black and half Afrikaner—are all finally able to swallow the reality of integration (and rugby). These are all poignant images—the first time around.

Freeman’s performance is good if not great. There are moments when he seems too focused on nailing the accent and his locution becomes distractingly halting. As Pienaar, Damon isn’t given a whole lot to say or do and there are no other actors or characters of note. Not much effort is expended to showcase the country’s natural beauty and the serviceable cinematography and the other tech credits are likewise merely adequate.

Due to most spectators’ lack of familiarity with the game, Invictus will get less traction as an underdog sports flick than it might have. Rightfully, social and political issues take precedence. South Africa’s history is complex, and the expositional shortcuts—mock archival footage and countless news reports—are excusable even if they’re overdone and not especially artful. Like The Blind Side, the movie’s impact derives more from the story than the execution. Seasoned vet that he is, Eastwood simplifies things with one hand and milks them with the other. Much the way Nelson Mandela, for the sake of his country, made sure he squeezed every drop of inspiration he could out of the Springboks.