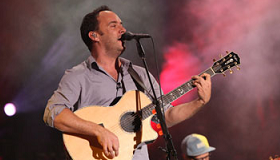 There are always benefits to watching a concert in movie form. You don’t have to put up with the tedious transition between bands or obnoxious people standing next to you, and you end up seeing only the best songs. Presented in nearly flawless 3D, Larger Than Life in 3D is a strong addition to the genre. The only thing that stops it from being a truly great concert film is the lack of an interview with Matthews or the presence of any backstage shenanigans to flesh out a more human-interest angle. Fans of Matthews will eat this effort up, and box office receipts should be healthy during the film’s limited engagement from December 11 to December 17. A long life on home-viewing platforms is also likely.

Save for a few establishing shots in the beginning of the Austin City Limits festival crowd entering the concert area, Larger Than Life in 3D is composed of non-stop music. Directors Luke Harrison and Lawrence Jordan keep their cameras moving at a brisk pace. The 3D presentation works the best during close-ups of the musicians and sweeping shots of the audience. Yet the fact that the project consists of music exclusively results in a slightly choppy cinematic experience. Luckily, the tunes are strong enough to partially make up for the lack of flow.

Gogol Bordello, Ben Harper and the Relentless7 serve as openers for Matthews and Co. Gogol Bordello’s frenetic live show plays particularly well in 3D, while Harper’s static set manages to keep the momentum going thanks to well-written songs, even though it isn’t very exciting on a visual level.

At 42, Matthews hasn’t lost a step in his live act. Like The Grateful Dead and Bruce Springsteen before him, Matthews is a master of transforming his songs into prolonged jams that are much more enjoyable than the recorded versions. His performance in this film is full of the kind of improvisation and expert leadership that makes for an excellent live show.

The set list in Larger Than Life is dominated by songs off of Matthews’ latest effort, Big Whiskey and the GrooGrux King. The album has a rougher edge to it than a lot of Matthews’ work and the songs translate very well live. “Shake Me Like A Monkey” and “Funny The Way It Is” are highlights.

It’s an inspired choice on the part of Harrison and Jordan to include a brilliant cover of “Burning Down the House” by The Talking Heads in the film. Of course, die-hard Matthews fans will wonder why he didn’t choose to play his epic interpretation of Bob Dylan’s “All Along the Watchtower” while the cameras were on him. Such is the reality of concerts: musicians can’t please everybody.

An extended version of “Ants Marching”—one of Matthews’ biggest hits—ends the entire affair on just the right note. Like any good concert, the audience is left wanting more.