My Son, My Son What Have Ye Done

on December 01, 2009 by Barbara Goslawski
Print 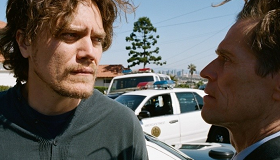 Herzog’s second film of the year—the supposed antidote to Bad Lieutenant: Port of Call New Orleans —is such a confused jumble of influences that it is completely ineffectual both as an experience and as an instrument of dialogue. The ‘good cop’ here is a mere shadow of a character, submerged by the facts behind a horrific murder which he is charged to investigate. Inspired by a true story in which a police detective was the driving force behind the arrest, Herzog’s hero is more of a traffic cop. In fact, Herzog can’t even turn the dynamic around to focus on the killer. There is no dynamic. As with his recent films, this outing is yet another in a series of stillborn Herzog creations. No style, no focus, no direction—no audience.

The real life story of the film has all the makings of a grand drama. No wonder Herzog gravitated toward it. Hank Havenhurst (Willem Dafoe, in a wasted performance) is called to investigate a murder in a quiet San Diego suburb. The facts are confusing and disconnected; the suspect is contradictory. Havenhurst bumbles his way through the investigation.

A woman lies dead in a pool of blood; her son has stabbed her with a sword in broad daylight. Brad (Michael Shannon), is now barricaded in the home he shared with mom, alternately threatening more murder and mayhem, and sending out arcane signals.

Brad’s fiancé and his friend arrive and slowly fill in the back story. This information is presented piecemeal; Herzog’s style in this film is fitful at best. This simplistic presentation of details lasts too long to add up to anything tangible—never mind building the suspense needed for a thriller.

Equally disruptive is Herzog’s continual referencing of his own body of work throughout the film. The references don’t really advance any essential elements like plot or character or theme, they just appear as witty asides. Besides, in terms of his own filmic practice, Herzog presents nothing new here: he seems content to continue resting on his laurels, yet again (remember Rescue Dawn ?).

Brad is the real point of interest in the film, a disturbing enigma and a walking blank stare all rolled into one. He’s a young man who’s explored the world and had great adventures, even the requisite Herzogian trek to Peru. Yes, he’s as unstable and obsessive as the other brilliant madmen in the great director’s pantheon but not quite as extraordinary. Brad had recently become overly absorbed in a role in a Greek tragedy that involved a son killing his mother. Besides its literal connection, this fact could have raised Brad’s actions above the strangeness of everyday existence into a mythic sphere. But Herzog’s episodic system drains this fact of the full extent of its symbolism.

The most disappointing aspect of this film is its unapologetic emulation of David Lynch’s work. True, the film is “a David Lynch presentation” and no doubt, the American master was deeply flattered by such an homage. And certainly, no one need remind me of Herzog’s influence on Lynch. But one thing is clear: this marriage of influences does not enliven any considerations of the themes and practices of either director. Their life’s work is not enriched by this project; there’s no movement forward through this film. In fact, it’s now time to cue the dwarfs to start walking backwards.