close
Spectacular and indeed a worthy follow up to Chicago 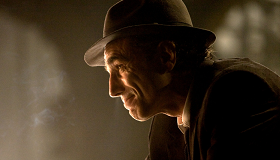 Although it doesn’t have the broad appeal of Chicago or the most complex songs (with the exception of its penultimate anthem, “Be Italian,” audiences won’t likely leave the theater humming tunes from Nine ), Rob Marshall has delivered an exceptionally well-crafted film adaptation of the Broadway musical inspired by 8 ½, Federico Fellini’s 1963 paean to one man’s personal and creative crisis. With a stunning lead performance from Daniel Day-Lewis and a glorious supporting cast of international female stars, this dreamlike fantasia set in the go-go Italia of the mid-1960s will sweep those willing to succumb to its ravishing ‘dolce vita’ right off their feet. As a holiday offering for more simple-minded mass audiences this may be a tougher sell. Still, The Weinstein Company should see massive grosses from a limited December 18th break and respectable if not stellar returns when it goes wide on Christmas.

Based on the 1982 Tony winning musical by Maury Yeston and its equally successful revival with Antonio Banderas in 2003, the film version has been streamlined and cinematized in a way that makes perfect sense for the source material. Literally centered around Guido (Day-Lewis), a self-absorbed movie director who finds himself in big creative trouble as he is about to start his ninth production (and hasn’t even begun the scripting process), the movie smartly establishes his personal and professional conundrum right off the bat in a number in which all the women in his life converge in dreamlike fashion on a studio soundstage. The film then focuses, mostly one at a time, on the effect these ladies have on his life and his ability to turn in another masterpiece.

Of course this is a musical and Marshall knows better than anyone how to pull off a multitude of complicated musical sequences without ever throwing this particular soufflé off balance. Cottillard gets a couple of numbers, including the plaintive new song “Take It All,” as well as “My Husband Makes Movies,” and proves quietly touching and real in both. Cruz sizzles on ropes and pink drapes in “A Call To The Vatican,” while Hudson proves to be a spitting image of a Goldie Hawn circa1963 in another new entry, “Cinema Italiano.” Dench is effectively delightful in her biggie, “Folies Bergere” (although it oddly lacks the fire of the stage version), and Kidman’s Moulin Rouge! experience shows in her fine “Unusual Way.” Loren, whose brief presence is one of the movie’s greatest pleasures, delivers a lovely Italian lullaby (the third new song written specifically by Yeston for the film). Fergie, the movie’s only “pro” singer, predictably belts out “Be Italian” with power and gusto. Day-Lewis himself is no slouch in his couple of numbers as well.

The true star here though is Marshall, who has brought his own singular style and verve to this splendid adaption. Nine is simply sensational and is indeed a worthy successor to his Best Picture winner, Chicago in every way.