close
A stage play dressed as a romantic dramedy 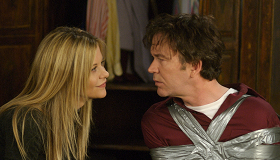 Three years after her tragic murder, actress/writer/director Adrienne Shelly is once again represented on the screen thanks to fellow actress Cheryl Hines who championed Shelly’s unproduced screenplay Serious Moonlight for her own directorial debut. Had Shelly lived, it’s likely this would have been her writing/directing follow-up to critical favorite Waitress, in which Hines co-starred. Even still, it’s hard to imagine Shelly being much more successful than Hines at enlivening what is essentially a one-act theatrical trick: trap two characters in a contrived dilemma and force them to work out their relationship issues for a similarly trapped audience of voyeurs. Past-their-prime stars Meg Ryan and Timothy Hutton somewhat compensate for the uneven attempts at satire and largely predictable narrative trajectory, but the fact that the film has already been available via VOD for several weeks would appear to counteract any hopes of substantial box office figures even from specialty audiences.

The attempt at throwing a darkly comic twist on the old “breaking up is hard to do” paradigm starts with Ian (Timothy Hutton) attempting to dash off a polite but firm break-up letter to his wife, Louise (Meg Ryan), just as she returns unexpectedly to their country vacation home. An altercation ensues, escalates and ends with Ian waking from a knock on the noggin to find himself duct-taped to the toilet where Louise intends on leaving him until he comes to his senses and realizes that he still loves her. Before it’s all over their lives will be further complicated by the intervention of Ian’s perky, young mistress (Kristin Bell) and a sadistic punk (Justin Long) who takes advantage of the predicament to execute a surprisingly vicious home invasion robbery.

Despite some praiseworthy moments and some interesting ideas, Serious Moonlight consistently feels like something that would have been better served as a modest, off-Broadway stage production where the furious cascade of twists, turns and reversals are more easily excused by the natural limitations of the medium. On film, however, that artifice, combined with the unnaturally accelerated emotional progressions of the characters, feels painfully unconvincing. Not that it’s meant to be terribly realistic; the tone, at least as Shelly intended it, is meant to be satirical. But Hines never quite gets that tone right. In fairness, Hutton and Ryan aren’t exactly ideal casting—neither has much of a pedigree when it comes to screen satire—which leads to some awkward emotional vacillations when the two are wrestling with the frustrating vagaries of their relationship. But even the likes of Long and Bell—both more naturally skilled with satirical material—don’t quite seem to know when to play it straight or broad.

Again, had this particular production debuted on stage rather than film, Hines and her cast would have had the luxury of several nights of previews to help tweak and fine tune the effort to the benefit of both the material and the audience. The movie conversely feels disengaged and misdirected, a forgettable reminder that every clever idea does not a good movie make.