close
Contradictions abound in the life of the great writer 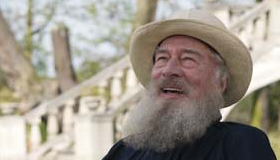 The Last Station depicts the final months in the life of Leo Tolstoy, focusing on the volatile relationship of the Russian writer and his wife Sofya during that time. With an exceptional cast headed by Helen Mirren and Christopher Plummer as the long-married couple and a compelling story, this Station received extremely strong buzz at the Telluride Film Festival, indicating the appeal of this superb production. Critical attention, potential year-end awards and nominations and word of mouth should build interest.

In 1910 Tolstoy was the most celebrated writer in the world, made popular by famous novels like War and Peace and Anna Karenina. Last Station slyly shows the author’s media celebrity with the newsreel cameramen continually filming activities outdoors of his estate.

A world-wide Tolstoyan movement has sprung up preaching the virtues of celibacy and vegetarianism, while also preaching against private property. Chertkov (Paul Giamatti), an ardent disciple of Tolstoy, schemes to convince the author to follow the movement’s ideals by changing his will to give the rights of his classic books to the Russian people instead of his family. Giamatti’s Chertkov has a pompous self-righteousness that ignores the human costs of the ideas he tries to spread.

Sofya considers herself an integral partner in Tolstoy’s work. She had copied War and Peace by hand six times and discussed that book’s characters with her husband as he was creating them. Faced with Chertkov’s plans for her husband’s legacy, Mirren’s Sofya determinedly fights to maintain control of her family’s financial future, utilizing everything from charm to bitter rage. Sasha (Anne-Marie Duff), the Tolstoy daughter, firmly supports Chertkov and is dismissive of her mother.

Chertkov selects Valentin (James McAvoy) to work as Tolstoy’s secretary. Chertkov expects Valentin to inform on Sofya, but Valentin becomes conflicted after meeting her. James McAvoy, whose roles were more serious in films like Atonement, is quite adept in the comedic scenes as Valentin tries to hide his developing relationship with the free-spirited Masha (Kerry Condon), whom he meets on the Tolstoy estate. His life does not always fit with the principles he espouses.

The film would not be so successful without the strong chemistry between Mirren and Plummer that makes apparent the intensity of the connection in the Tolstoy marriage. They make a masterful acting combination. Both are award-caliber. Mirren gives a forceful performance, showing the depths of Sofya’s feeling toward her husband as well as her fury as Chertkov and others come between them. (Mirren has called Sofya one of her “great roles.”) Plummer is charismatic as Tolstoy with an irreverent self-awareness of his contradictions, telling Valentin, “I’m not a very good Tolstoyan.” He speaks against privilege, but lives in a palatial estate waited on by servants.

Writer/director Michael Hoffman ( Restoration ) based the screenplay on the novel by Jay Parini who used the diaries of Tolstoy and others to write the film’s historical characters. Tolstoy kept both public and private diaries. Hoffman said he was influenced by the Russian playwright Chekhov to have “tragedy and comedy lie really close to each other,” which he has done here expertly.

Hoffman’s direction builds up tension as Tolstoy is torn between his love of Sofya and the Tolstoyan ideas pushed by Chertkov, leading to emotionally rich confrontations with Mirren and Plummer. In the privacy of their bedroom, Tolstoy and Sofya have a warm and even playful relationship, but Chertkov generates discord between them. At times the stress becomes too much for the aged writer, culminating in his decision to flee his estate with an entourage including Chertkov and Sasha. A shattered Sofya follows them to a train station as does the international media. In The Last Station, Hoffman has made a fascinating exploration of what he describes as “the difficulty of living with love and the impossibility of living without it”.